SWR says long-delayed fleet will be introduced as “early in the New Year as possible”. 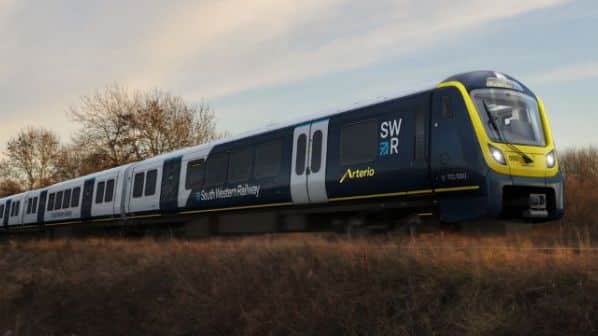 BRITAIN’s South Western Railway (SWR) says that the first EMUs of its £1bn, 90-strong fleet of Arterio trains will come into service in 2023 on third-rail electrified commuter routes between London Waterloo and Berkshire and Surrey.

The new fleet, designated class 701, will eventually comprise 60 10-car and 30 five-car trains which are due to replace SWR’s entire fleet of class 455, 456, 458 and 707 EMUs. However, their introduction in 2023 is three years later than originally planned.

The Arterio trains were originally due to enter service in December 2019 and the delay has been blamed by SWR on the impact of the Covid-19 pandemic. However, with 24 of the 90 trains so far accepted from Alstom by SWR there have been reports of numerous software faults, confirmed in a reply from the Department for Transport (DfT) to a Freedom of Information (FoI) request submitted by SWR passenger, Mr Rich Williams.

Other problems reported by BBC South based on information supplied by train drivers’ union Aslef include faults with door obstacle detectors which have prevented Arterio EMUs from being accepted for driver training, issues with the coupling process, faulty windscreen wipers and cab doors which are difficult to open.

Despite these problems, SWR says the new trains will enter service as early in 2023 as possible and Alstom points out that it acquired the trains’ original manufacturer, Bombardier, at the end of 2020, long after the initial estimated delivery date.

"Since then Alstom has delivered the same model of train to other customers including the Elizabeth Line which are operating very successfully,” an Alstom spokesman told the BBC.

Alstom is building a total of 750 Arterio cars at the former Bombardier plant in Derby, which will offer greater capacity, faster acceleration and braking and wider driver-operated doors to reduce station dwell times.

Other features of the new trains include regenerative braking, with up to 30% per cent less energy consumed as current is returned to the conductor rail during braking. Onboard facilities include Wi-Fi, charging points at every seat, real-time journey information, cycle racks, dedicated wheelchair and multi-use spaces and fully accessible, controlled-emission toilets (CET) featuring bioreactor technology.

Bioreactors treat waste to produce water compliant with EU standards for bathing and are already in use in the Netherlands and Switzerland. The SWR Arterio fleet will be the first British deployment of bioreactor train toilets.