Brand new trains were made redundant at SWR before entering traffic. 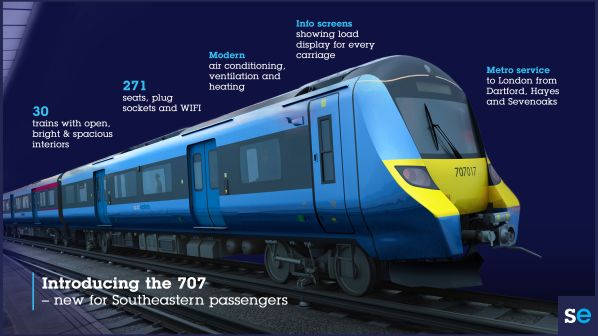 The initial batch of the cascaded five-car 160km/h Siemens trains will operate on the Hayes line as well routes to Sevenoaks and Dartford, and will replace Networker EMUs dating from the early-1990s.

A full service will be introduced with the class 707s next year once all 30 have moved from South Western Railway. All the EMUs will receive a refresh including a deep-clean. Six have already moved for training with two more due this month.

Class 707s are standard class-only and fitted with metro-style interiors. They have 271 seats per five-car train, plus sockets, Wi-Fi, air-conditioning, passenger information screens including a loading display for each coach.

“Bringing in modern, reliable trains with more space is an important part of the work we are doing to encourage people back to rail travel,” says Mr David Statham, Southeastern managing director.

The class 707s are transferring from SWR, where they were made redundant before they had even entered traffic. Ordered in 2014 as part of a British government plan to boost capacity at London Waterloo, the trains were delivered in 2017, by which point FirstGroup/MTR had won the SWT franchise with a bid that included replacing the class 707s with even newer Bombardier (now Alstom) class 701s.

Angel Trains, which owns the fleet of 30 class 707s had even suggested the brand new trains could be scrapped before they eventually began moving to Southeastern.