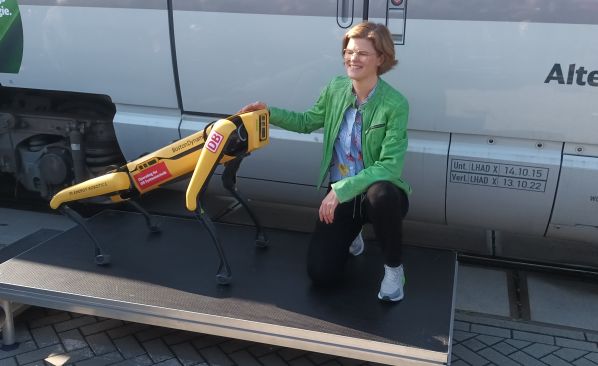 Dr Daniela Gerd tom Markotten, DB board member for digitalisation and technology, with Spotty the robot.

AS part of its Project E Check, German Rail (DB) is starting to deploy robots in maintenance workshops which can visually inspect under and on the roofs of trains to detect faults. The first prototype robot was installed in Munich and now they are now being rolled out in Cologne and elsewhere.

Called Spotty, the robot digital assistant was developed by Boston Dynamics and Energy Robotics. The robot has four legs fitted with wheels so that it can walk like a dog or roll. It can lower itself, adjust its angle and climb steps.

The robot is used in conjunction with a camera portal which scans the train as it enters the depot. The cameras on the portal can scan 2200 points of interest and collect up to 300Gb of data. AI is used to compare the actual situation with how the train should be performing.

“We have two robots so far,” Dr Daniela Gerd tom Markotten, DB board member for digitalisation and technology, told IRJ in Berlin. “It is increasingly difficult to get people to work under or on top of the train, so it is important to push this type of innovation forward. When we combine it with AI we get a very efficient system. Everything we can do using software makes it much faster.”