The contract has been awarded by seven German and Austrian partners following a Europe-wide call for tenders. 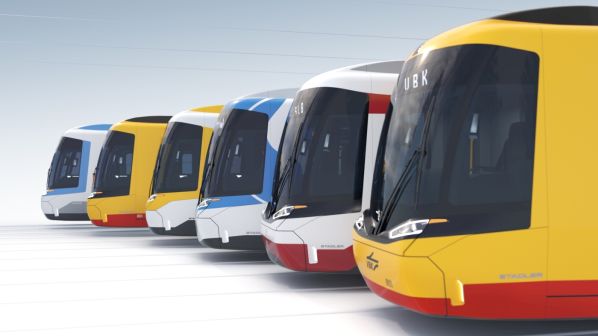 Part of the VDV tram-train order is for the new routes.
Photo Credit: Stadler.

SEVEN German and Austrian partners awarded Stadler a contract worth around €4bn for up to 504 Citylink tram-trains on January 14, the largest order in the company’s history, as part of the Association of German Transport Companies (VDV) Tram-Train project.

The project was launched in 2017 as a discussion with manufacturers and system suppliers with a view to reducing the cost of procuring the vehicles by around 20%. The consortium now includes Karlsruhe Transport Authority (VBK), Albtal Transport Company (AVG), Saarbahn, Schiene Oberösterreich (Schiene OÖ), the state of Salzburg, the Neckar-Alb regional railway, and Baden-Württemberg’s state-owned rolling stock company SFBW.

The contract includes a firm order worth €1.7bn for 246 Citylink tram-trains to be delivered over the next 12 years, as well as 16 years’ maintenance with an option to increase this to 32 years. This work will be subcontracted to the partners’ workshops.

Representatives of AVG, VBK, Saarbahn, Erms-Neckar-Bahn, and Central Saxony Transport Authority (VMS) signed an agreement to jointly procure up to 240 tram-trains in March 2019, with the regional government of Upper Austria instructing Schiene OÖ to join the consortium in January 2020. VBK was responsible for the overall project management of the tender process.

“On the project team, we spent hours developing a common set of specifications,” says overall project manager, Mr Thorsten Erlenkötter, from VBK. “We defined a standard with up to five further versions to meet the operator-specific requirements such as boarding height, coating and place of use. You can compare the project to a grafted fruit tree that bears different varieties of the same fruit. There is only one trunk but different tastes and harvest periods.”

The first four tram-trains will be delivered to Saarbahn as pre-series vehicles as early as 2024, where they will be tested by the consortium. Saarbahn will then receive another 20 tram-trains from 2025 to replace its existing fleet, with an option for a further 21.

The tram-trains will be manufactured in Valencia, Spain, where Stadler has focused the production of Citylink, which it has previously supplied to cities in Germany, Spain, Hungary and Britain.

“We are proud to be pioneers in this light rail innovation of the tram-train,” says Stadler chairman of the board and group CEO, Mr Peter Spuhler. “It takes experience to design a tram-train vehicle and this particular tender also requires the ability to combine individual solutions and standards. Stadler has always been at home in both areas. With the Citylink, we are looking forward to providing our customers with a mobility solution that connects the city and the surrounding area without changing trains, thus further developing the way we travel in a sustainable and comfortable way.”

“We are very happy that with Stadler we were able to secure a reliable and experienced manufacturer for this extraordinary project,” says VBK and AVG board chairman, Dr Alexander Pischon. “A procurement concept like the one we have implemented here is so far unique worldwide. We all benefit not only economically, but also share our know-how.”

“The seven partners are united by their belief in the concept of the tram-trains, with which we network cities with the respective region around them according to the Karlsruhe model and bring people directly into the centre quickly and without transfers,” says VBK and AVG technical managing director, Mr Christian Höglmeier.

“Conventional rail means it ends at the station and passengers have to change to the tram,” says Saarbahn operations manager, Mr Michael Irsch. “Our tram-trains are both: a railway and tram in one. ‘Together we are stronger’ has been the motto of the companies organised in the platform since the beginning of the project.”

“With the awarding of the contract, we have come a decisive step closer to our common goal of making public transport more attractive,” says Saarbahn managing director, Mr Peter Edlinger. “Saarbahn has been actively involved in the platform from the very beginning, and we are accordingly proud and pleased that things are finally getting underway.”

“It is true that the tram-train project required a cross-border show of strength by all partners,” says Schiene OÖ managing director, Mr Herbert Kubasta. “However, the resulting high quantities, the high degree of standardisation and the long availability bring cost advantages and access to the most modern generation of multi-system local transport railcars in Europe to all participants over a long period of time. We are already looking forward to the first use of the vehicles in 2026.”

“State-of-the-art vehicles for modern public transport is our goal,” says provincial councillor, Mr Stefan Schnöll, on behalf of the province of Salzburg. “We have taken a big step towards this goal with this joint project. The cooperation of a renowned manufacturer and the cooperation of a team of experts from a wide range of operators are a guarantee for the best quality. This is exactly what we want for our passengers.”

“Each partner has contributed its strengths to the cooperation,” says managing director of the Neckar-Alb Regional Light Rail, professor Dr Tobias Bernecker. “The result is absolutely convincing, especially for the conditions in the Neckar-Alb region with its challenging topography.”