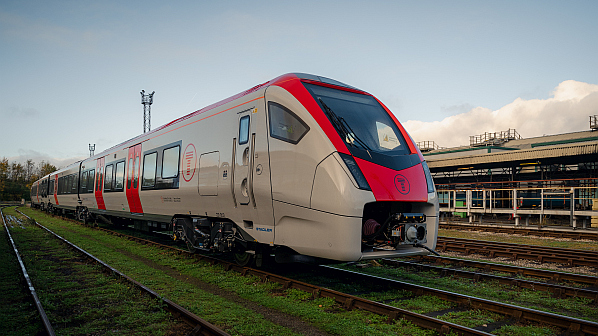 TRANSPORT for Wales (TfW) Rail has taken delivery of the first class 231 Flirt DMUs from Stadler for testing.

The 80.7m-long 140km/h class 231 trains have capacity for 423 passengers, with 202 seated. The trains are fitted with air-conditioning, power sockets and passenger information screens. There are spaces for two wheelchairs per four-coach train. The bodyshells were built in Szolnok, Hungary, with final assembly completed in Bussnang, Switzerland.

The DMUs are fitted with four Deutz V8 480kW engines and have been delivered to Canton depot, Cardiff, for initial testing and commissioning. The class 231s will operate on the Cardiff Central - Ebbw Vale and Maesteg - Cheltenham Spa routes from the end of 2022.

TfW is spending £800m on 138 new trains. CAF is building 51 two-car and 26 class 197 three-car DMUs, and testing of the first of these is already underway. Stadler is also building seven three-car and 17 four-car class 756 tri-mode trains and 36 three-car tram-trains. The new trains are designed to replace nearly all the existing TfW fleet except for locomotive-hauled trains and class 230s on the Wrexham - Bidston route.