The tram-trains will be delivered to the German city from summer 2025. 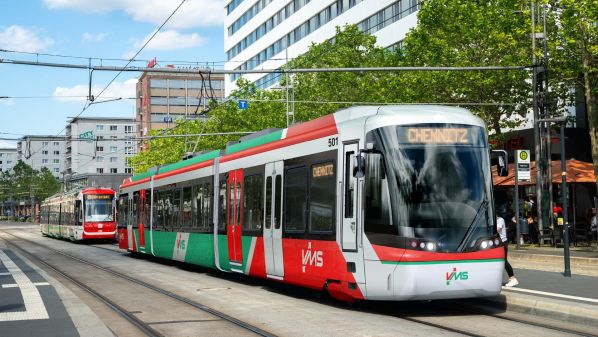 MID Saxony Transport Authority (VMS) has awarded Stadler a contract to supply 19 dual-system Citylink tram-trains for Chemnitz. The authority has also approved the construction of a new depot at Sachsen-Allee in Chemnitz. The full project including the vehicles, depot and maintenance will cost €234.56m.

The contract, which includes an option for a further 27 tram-trains, was signed after the association assembly approved the contract at the beginning of March. Stadler will start delivering the three-section tram-trains from summer 2025, with the vehicles due to enter passenger service in June 2026.

VSM launched a tender for up to 46 tram-trains, including a firm order for 19 vehicles, in December 2020. The project will be financed through loans, subsidies from the state of Saxony and funds from the Central Saxony Special Purpose Transport Association (ZVMS), which VMS is a member of.

The 37.5m-long vehicles will have capacity for 236 passengers, including 88 seated. These second-generation tram-trains will have four double doors on each side, four areas for prams, wheelchairs and bicycles, and will be equipped with a dynamic passenger information system and a radio-controlled information system for the blind.

The tram-trains will have a tractive effort of 900kW and a top speed of 100km/h and will operate on the 600/750V dc electrification network within the city and the 15kV 16.7Hz mainline network.