Trains for Palatinate and Saarland have level boarding and special arrangements for cyclists. 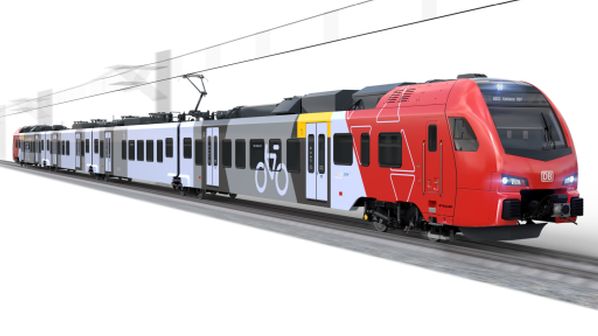 An impression of one of Stadler's Flirt trains to be operated by DB Regio on the MoselLux network, showing the exterior bicycle branding on the leading car where there are two sets of doors for passengers boarding and exiting with bikes.
Photo Credit: Stadler

GERMAN Rail (DB) and Stadler have signed a contract for the rolling stock manufacturer to supply 19 four-car Flirt EMUs for use on the MoselLux network in western Germany and Luxembourg.

DB Regio was awarded the MoselLux operating contract earlier this month by the transport authority of the state of Rhineland-Palatinate, SPNV-Nord, and the transport ministry of Saarland.

The high-capacity EMUs will be used on the Moselle Valley route between Koblenz, Trier and Luxembourg. From the end of 2024 the trains will also run on the Koblenz - Trier - Perl route.

After the completion of electrification in 2029, it is expected the new Flirt EMUs will be deployed on the branch from Bullay to Traben-Trarbach.

The four-car trains can accommodate a total of 507 passengers, with 245 seated and 20 in first class. The trains are fully air-conditioned and equipped with Wi-Fi, as well as a passenger information system. The passenger compartments are well lit and designed with multi-purpose areas able to accommodate up to 30 bicycles, two wheelchairs and two walker frames.

A special feature of the new Stadler trains for the MoselLux network will be a one-way system for bicycles in the two end cars, each of which will have two sets of double doors on each side. A large image of a bicycle on the outside of the carriage allows cyclists to see where they can load their bikes quickly and easily, without encountering obstructions. It is intended that they board with their bicycles through one set of doors and exit through the other pair at the end of their journey.

In total there are seven sets of doors on each side of the four-car train that provide level boarding.  Each train has a fully accessible toilet and an additional toilet compartment.

“We are very pleased that we have won the MoselLux contract and that, together with our partners in public transport, we can continue to shape and advance the turnaround in mobility,” says Mr Oliver Terhaag, operations director at DB Regio.