The trains will enter traffic in 2026 following the start of the cross-border services in 2025. 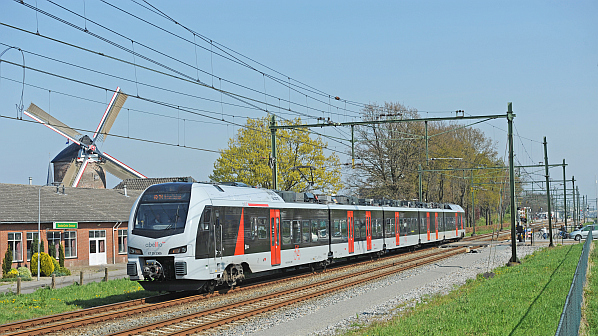 Start won the tender to operate the services on the RE13 Mass - Wupper Express line, which operates via the Kaldenkirchen - Venlo line, in December. At the time of the contract award it was confirmed that Stadler dual-voltage Flirt3 EMUs would be ordered, similar to those already operating on two other Dutch-German cross border regional services.

The new Start fleet will enter service in 2026 and will be equipped to operate on 1.5kV dc in the Netherlands and 15kV ac in Germany. The trains will also be fitted with onboard ETCS equipment as well as PZB for Germany and the Dutch ATB system.

The trains will have capacity for 375 passengers (235 seated). There will be 34 first-class seats. The trains will be equipped with air-conditioning, a Wi-Fi network and space for up to 12 bicycles as well as wheelchairs and prams.

All the vehicles will have step-free access and a fully accessible toilet. A passenger information system providing real-time information will also be installed.

Start will purchase the trains but sell them to regional public transport authorities Rhine-Ruhr Transport Association (VRR) and Westfalia-Lippe Local Transport (NWL), which awarded the tender for the passenger services. VRR and NWL will assume the financing for the trains, and lease them to Start for the duration of the 14-year contract, which is due to start in December 2025 and expire in December 2039.