Stadler to supply LRVs to Geneva 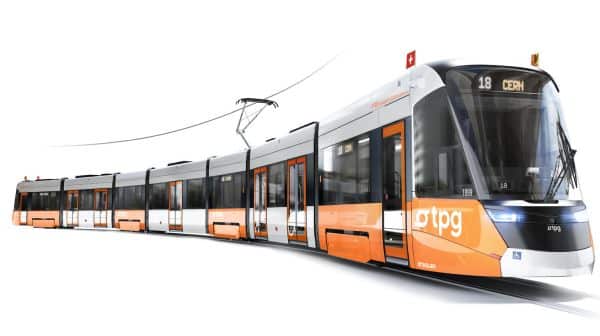 An artist's impression of how the TPG Tramlink vehicles from Stadler will appear when they enter service from 2025.
Photo Credit: Stadler

GENEVA Public Transport (TPG) and Stadler have signed a contract for the supply of 38 Tramlink LRVs for the future expansion of the Swiss city’s network, including an option for up to 25 additional vehicles.

The awarding of the contract to Stadler was first mooted last summer and the agreement has now been confirmed. The first of the Tramlink vehicles are expected to be introduced from late 2025. TPG already operates 41 Stadler Tango LRVs.

The bi-directional Tramlink vehicles will be 44m long and 2.3m wide, with capacity for up to 250 passengers. Separate standing and seating areas with large windows will help to give the interiors a feeling of spaciousness and there will also be dedicated areas for wheelchairs and bicycles.

The cab fronts will be to a profile designed specifically for TPG and the vehicles will be low-floor throughout, including over the bogies, and fully accessible without ramps or steps. The bogies with continuous axles have been designed for quiet and comfortable operation.

Each LRV will have a heating, ventilation and air- conditioning (HVAC) system which uses CO2 as a natural refrigerant, helping to ensure environmentally-friendly operation and to meet climate change targets set by the Geneva Cantonal Council.

In November the Swiss city of Lausanne placed an order with Stadler for 10 Tramlink LRVs to operate a 4.6km light rail route currently under construction.