BERLIN Transport Authority (BVG) has awarded a framework contract, which could be worth nearly €3bn, to Stadler for 1500 metro cars for the U-Bahn network. 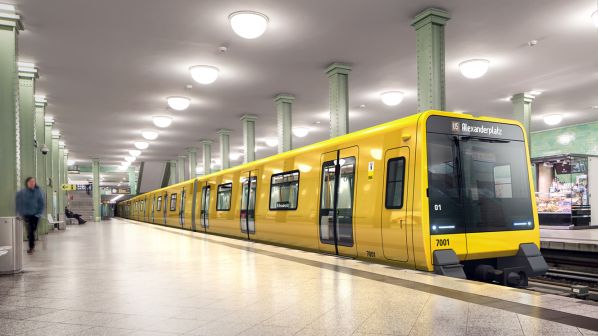 Artist's impress of the one of the new Stadler metro trains for the Berlin U-Bahn.

BVG was able to finalise the deal following the rejection of an appeal against the contract by an unsuccessful bidder by the Berlin Court of Appeal on March 20.

The framework agreement includes a fixed minimum order for 606 cars. Under the first tranche, Stadler will supply 376 cars formed into two or four-car trains for both the small and large profile lines from 2022 onwards. BVG has also confirmed an order for another 230 cars, but the delivery date will be decided later.

These firm orders are worth around €1.2bn including the supply of spare parts.

The framework agreement includes an option for a further 894 cars.

Stadler IK series trains already operate on BVG U-Bahn lines U1, U2 and U5. The new J/JK series trains will be energy-efficient with noise reduction features, and the depth of the door pillars has been adjusted to improve access.

“We are very proud to have won one of the largest delivery contracts ever awarded in Europe,” says Mr Jure Mikolčić, CEO of Stadler, Germany. “We have decided to bring forward our planned investments in the Stadler location in the German capital in order to create an optimal basis for the implementation of this major project.”

Stadler has already announced that it will invest up to €70m in the Berlin-Pankow site including a new production hall and optimised space for logistics and commissioning.