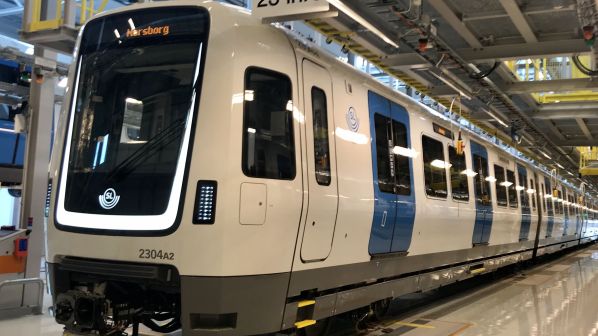 The batch is part of an order for 96 trains made by SL in 2013. The six trains were originally imported into the country in 2018 by Bombardier Sweden and were approved for passenger service in June 2019. The company subsequently ran endurance tests before transferring ownership to SL this month. The remaining 90 trains are currently being assembled at Bombardier’s site in Hennigsdorf, Germany.

The new four-car trains will replace ageing C6 and C14 metro trains currently operating on the Red Line, which connects the north-eastern and south-western suburbs with the city centre. The trains will undergo trials before beginning regular service.

Additionally, they are manufactured from 98% recyclable material and incorporate Bombardier’s Flexx Eco bogies, which are designed for energy efficiency and reduced maintenance.

The trains have seating for 140 passengers in a four-by-four configuration, as well as standing areas and multi-purpose spaces which are arranged to optimise passenger flow and comfort. In addition, the trains are equipped with six sliding doors per car to maximise accessibility from the platforms and feature air conditioning.

Stockholm’s new rolling stock is part of the city’s plan to expand metro capacity, which includes extensions to the Blue and Yellow lines. The scheme intends to accommodate for the city’s fast-growing population, which is currently expanding by around 35,000 new residents a year.