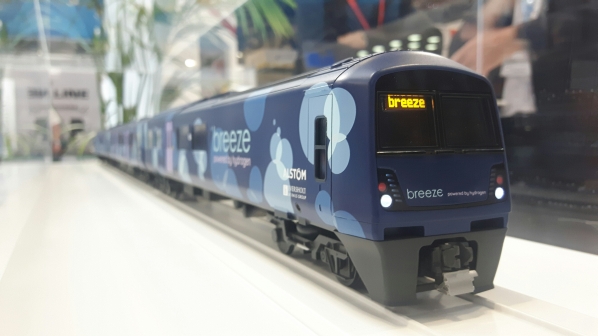 ALSTOM and rolling stock leasing company Eversholt Rail unveiled a concept for a hydrogen multiple unit (HMU) for the British market in January.

The study, undertaken by global consultancy firm Roland Berger, found that FCH technology is expected to play an increasing role in the railway sector starting with multiple units, especially for long-range and high-power demanding uses.

“By 2030, one in five newly purchased rail vehicles in Europe could be powered by hydrogen,” the report says. “The latest developments in the field in Germany and France show that this technology will complement electrification in Europe and enable the complete decarbonisation transformation in rail with the flexibility it offers to the train operators.”

The study found that FCH trains are able to perform to the same standard as diesel technology, and have the potential to become a cost-effective alternative in the near future, especially in areas where the cost of producing hydrogen is cheap, such as Scandinavia.

FCH trains were also found to be a valid alternative to electrified trains on lines with 10 or fewer services a day, while the long range and ability to refuel quickly meant the technology overcomes some of the constraints of batteries.

“With this competitiveness of FCH technology and the given framework conditions, FCH multiple units can potentially replace 30% of diesel volumes as the most market-ready application by 2030,” the report says. “Current multiple units in the market and open tenders suggest that new models can be introduced, also fuelling export opportunities to non-European countries.

“Shunters and mainline locomotives could follow with a relatively modest market uptake, mostly due to delayed market introduction - which is not expected to happen before 2023 - and the further need for technology development.”

Based on an analysis of different case studies throughout Europe, including four case studies focusing on multiple units, three on shunters and three on mainline locomotives, the study made a number of conclusions, including:

While several barriers to the introduction of the technology were identified, the report found that these were not insurmountable and were on par with those of any technology on the cusp of mainstream integration.

The study listed three targeted research and innovation (R&I) topics that would tackle the most important of these barriers, including a large-scale demonstration for multiple units and two research and design projects focusing on various aspects related to both shunter and freight locomotives.

Roland Berger also noted that for the use of FCH to become more widespread, the proponents of the technology need to approach and engage the rail industry on different fronts to accelerate deployment. The systemic use of hydrogen as a storage method for renewable energy and the higher utilisation of H2 infrastructure, such as through the multimodal use of infrastructure, was particularly interesting, the company found.

“The analysis finds that the global FCH train market development activities are currently concentrated in Europe,” says S2R executive director, Mr Carlo Borghini. “This is encouraging as it puts Europe at the forefront of FCH train technology, which constitutes a significant potential for the European FCH industry.”