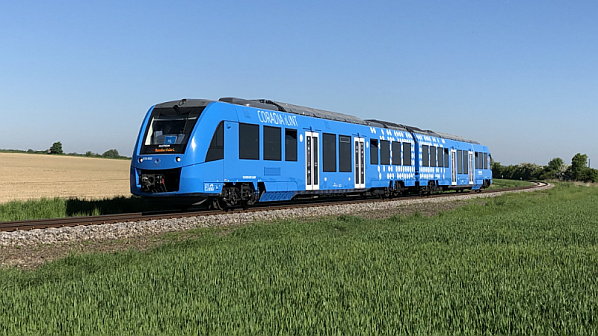 Alternative traction, such as hydrogen-hybrid units, will be considered as part of a study into prospects for 16 routes in Germany.
Photo Credit: Alstom.

THE German state of Baden-Württemberg has commissioned a study alongside regional partners to identify whether electric or alternative traction is the best option for 16 non-electrified routes in the state.

“Rail transport is a trailblazer for climate-friendly and sustainable mobility,” says Mr Berthold Frieß, Baden-Württemberg Ministry of Transport ministerial director. “The state government has set itself the goal of consistently advancing the expansion and electrification of the rail network in Baden-Württemberg and no longer procuring any new diesel-powered vehicles.”

However, the cost of overhead electrification can be prohibitive, the state says, with hydrogen hybrid (H2MU) or battery/hybrid (BEMU) trains an option, which can be introduced into service quicker and cheaper than the electric trains.

Diesel-hybrid trains will also be considered on feasibility and cost-effectiveness. Depending on which option is chosen additional infrastructure such as hydrogen filling stations or catenary islands may be needed on the routes.

The 16 routes chosen for the study are those assigned to category 3 – “long-term demand/vehicle-side solutions” in the electrification concept. The study will be undertaken by TransportTechnologie-Consult Karlsruhe and komobile w7.

The study will consider performance characteristics of the trains including acceleration and braking as well as energy requirements. The latter includes the need for auxiliary systems including heating, ventilation, air-conditioning, and compressed air.

“An iLint fuel cell train has been in trial operation on the Zollern - Alb railway for a few days,” Frieß says. “Battery-electric vehicles will go into everyday operation on network 8 ‘Ortenau’ from December 2023. In these projects we can gain valuable experience with alternative drives.”

Any final decisions will rely on funding, with Frieß saying that the state alone cannot pay for the new infrastructure and trains. “The federal government is also responsible for achieving the climate protection targets,” he says. “The expansion of the federal infrastructure must be promoted, and the regionalisation funds must be increased so that more traffic with innovative vehicles can be on the rails.”