The new trains were manufactured at Talgo’s factory in Alava, Spain. 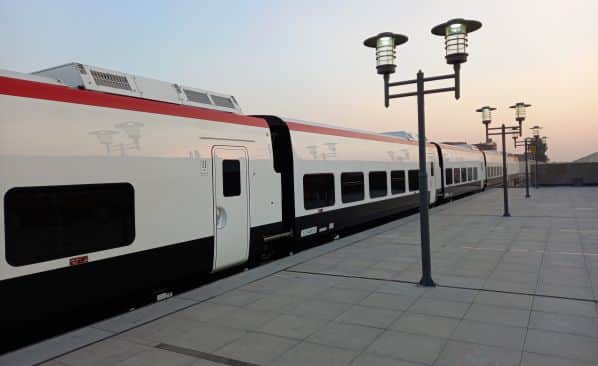 ENR awarded Talgo a contract worth €158m to supply the six trains in April 2019, financed by the European Bank for Reconstruction and Development (EBRD). The deal included the construction of  a new Talgo maintenance facility in Egypt where the trains will be maintained for the next eight years.

The aluminium-bodied coaches are similar to those which Talgo is building for Germany and Denmark but have high-power redundant air-conditioning systems which are certified to operate at temperatures of up to 50oC based on Talgo’s experience with its high-speed trains which operate between Mecca and Medina in Saudi Arabia.

The Talgo trains for ENR have a maximum commercial speed of 160km/h. Each train consists of a locomotive and 15 trailer coaches providing a total of 490 seats. There are five first-class coaches in each train plus eight second-class coaches, a mixed-use coach with a cafeteria and seats for people with reduced mobility, and a technical car. The trains have WiFi throughout and an infotainment system in the first-class coaches.

ENR awarded Talgo a second contract worth €280m in August 2022 for seven overnight passenger trains. Delivery of these trains will start in 2024 and they will be maintained at Talgo’s new facility under a 15-year contract.