The manufacturer has also received a €35m green loan from the European Investment Bank. 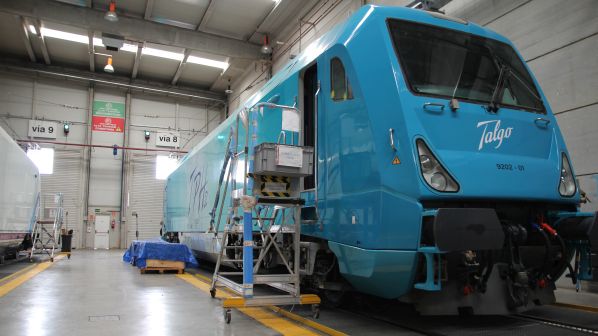 TALGO will begin static testing of its TPH2 hydrogen train prototype in March at the Las Matas factory near Madrid, ahead of dynamic testing on the factory’s tracks before being transferred to the Extremadura region to begin mainline testing. The manufacturer expects to validate its hydrogen cell technology before the summer.

The TPH2 train consists of the L-9202 Travca locomotive, which was manufactured in 2005 as a prototype to test a variable-gauge motorised bogie, and a Talgo Pendular set.

The prototype will be used to test the hydrogen fuel cell, with Talgo aiming to use the technology to develop its Talgo Vittal One multiple unit. The hydrogen will be supplied by Repsol following the signing of an agreement with Talgo in July 2021.

The locomotive will be powered at 3kV dc by the hydrogen cell instead of through its pantograph. There is little spare room in the locomotive and so hydrogen tanks and fuel cells will be fitted in the coaches. The range between refuelling is calculated at around 800km. Fuelling equipment will be rented to the hydrogen provider.

CAF is also developing a hydrogen train and is installing a hydrogen fuel cell on a Renfe Civia train as a leading member of the FCH2Rail consortium. Testing of this train will also begin this year in Spain and Portugal.

The announcement comes as the European Investment Bank (EIB) and Talgo signed a €35m green loan to finance various research, development and innovation (RDI) activities connected to the development of key components and systems for low-carbon rail transport vehicles to be conducted by Talgo in Spain between 2021 and 2024.

All the EIB-financed projects will be in line with the EU Sustainable and Smart Mobility Strategy and the Climate Bank Roadmap.