ŠKODA Transtech, Finland, handed over the first of 19 ForCity Smart Artic LRVs to Tampere on May 25. 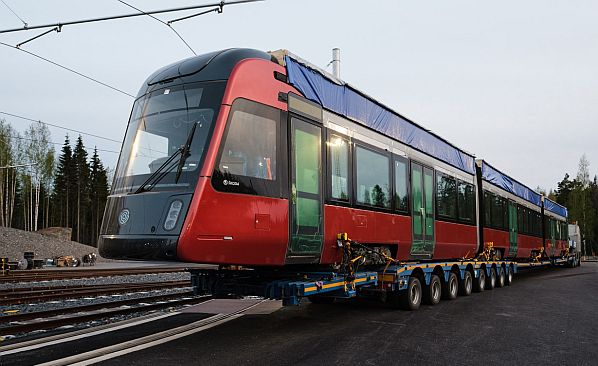 The LRVs are being supplied under a €100m contract which includes maintenance of the vehicles for 10 years. The contract has three options for the supply of up to 46 additional LRVs.

The vehicles will be tested in Tampere as Škoda Transtech does not have a test track at its plant in Otanmäki. “Therefore, some parts of the interior, such as upholstery, will be installed only after the installation of electrical equipment so that they do not interfere with measurement, adjustment and other tests,” says Mr Juha Vierros, CEO of Škoda Transtech. “In addition, some of the tests are performed in remote mode, where a group of software engineers from Plzeň connects to the delivered tram to test the tram systems.”

The bidirectional 100% low-floor LRVs are 37.3m long and can accommodate up to 360 passengers. The vehicles have barrier-free access for passengers in wheelchairs or travelling with children in pushchairs. To cope with the severe Finnish winter climate, the LRVs have heated floors and double glazing as well as air-conditioning for the summer months. All axles are driven.

The LRVs will be introduced on Tampere’s first light rail line which is due to open next year. The €238.8m Section 1 comprises a 15km Y-shaped line running east from Pyynikintori in the city centre to Hervantajärvi and Tampere University Hospital, with a depot in Hervanta.

Planning for section 2 from the city centre to Lentävänniemi is underway and Tampere City will decide on when to start construction by October at the latest.