Trains now set to start operating on new line from 2023. 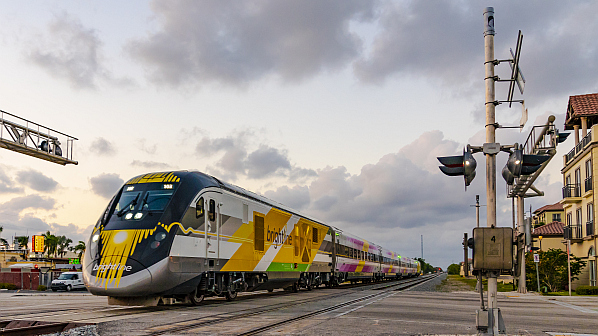 One of the original Brightline trains.
Photo Credit: Brightline.

BRIGHTLINE began operating test trains on a 209km section of line between West Palm Beach and Cocoa on January 18, as work continues ahead of the introduction of services on the full 378.6km Miami - Orlando route.

One round trip is expected to operate every day this year. Known as qualifying trains, these are federally approved non-passenger carrying services that enable drivers and conductors to learn the route of the new line.

The trains are currently only permitted to operate at a maximum speed of 96km/h, the same as freight trains.

Brightline says construction on its 273.6km Orlando extension is more than 70% complete, with more than 1300 people employed on the project. The operator expects to reach substantial completion of the extension by the end of year, with services now starting in early 2023 rather than late 2022 as was hoped.

Brightline has ordered five new trains from Siemens for the new route, with the first delivered from the manufacturer’s plant in Sacramento in October. The push-pull trains are formed of four coaches and two 3MW Charger SBC-40 diesel-electric locomotives at each end. All five will be delivered by this summer, and will initially be used on the existing 105km Miami - West Palm Beach Brightline service.

For data on North American projects, subscribe to IRJ Pro.

An interview with Brightline was published in the November edition of IRJ, and is available for digital subscribers here.