The first TMH maintenance facility in Germany has opened. 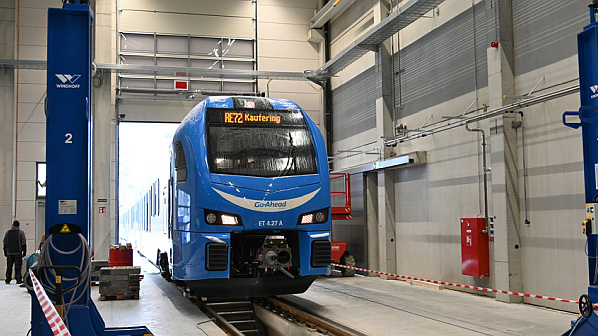 THE first of 78 new EMUs, which will enter service with Go-Ahead Bavaria from December 12, has arrived at a newly-opened €45m TMH Germany maintenance facility in Langweid am Lech.

The 12-year maintenance contract awarded by Go-Ahead December 2020 is the first of its kind in Germany for the international subsidiary of Transmashholding (TMH).

The facility will maintain 22 four-car Stadler Flirt EMUs for Bavaria’s Allgäu Electric Network (Munich - Lindau) contract, alongside 44 three-car Mireo and 12 five-car Desiro HC EMUs ordered from Siemens for the Augsburger Network. The Stadler fleet enters traffic from the timetable change on December 12, with the Siemens trains due to enter operation from December 2022.

TMH Germany, part of TMH International, will provide a 24/7 technical support hotline for Go-Ahead staff, and will also be responsible for the procurement of spare parts, depot management and vehicle maintenance records.

Construction of the facility has taken one year, with TMH Germany’s maintenance team re-locating from interim workshops at Bahnpark Augsburg to the new facility at the start of December.

Once fully completed next summer, the TMH facility will feature three sheds with a total of 9000m2 workshop space, 2000m2 logistics space and 1500m2 office space. There will be capacity for other operator’s rolling stock to receive light and corrective maintenance as well as wheel reprofiling.

When complete, the depot will service around three to four trains per day.

Earlier this year a dispute erupted between Stadler and Go-Ahead concerning the TMH maintenance contract. Media reports suggested that the Swiss manufacturer had objected to a rival manufacturer, in this case TMH, maintaining its trains as this would mean full technical information would have to be supplied to a direct competitor, leading to industrial espionage.

For in-depth data on all new train orders, subscribe to IRJ Pro.