TEM18DM shunters will operate at three mines owned by Kuzbassrazrezugol. 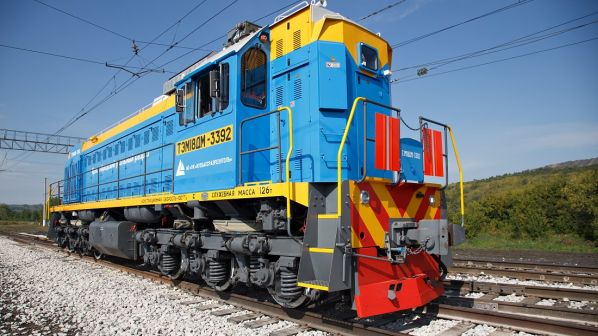 FOUR type TEM18DM diesel shunting locomotives manufactured by  Bryansk Engineering Plant (BMZ) have been supplied by TMH Industrial Solutions to Kuzbassrazrezugol, part of the Ural Mining and Metallurgical Company (UMMC) which is one of Russia’s main producers of coal, copper and zinc.

TMH Industrial Solutions and BMZ are both divisions of Transmashholding (TMH), Russia’s largest manufacturer of locomotives and rail equipment.

The TEM18DM locomotives will perform shunting and line haul duties on coal lines. Two will operate at Kuzbassrazrezugol’s Kaltansky coal mine, one will go to the Bachatsky opencast mine, the largest in the Kuzbass coalfield, and one to the Krasnobrodsky opencast mine.

“The TEM18DM’s functionally meet our needs. This is a modified and improved model of the TEM18 series of locomotives, which have proven themselves well when operating at Kuzbassrazrezugol companies.”

Last month, BMZ supplier three type TEM18DM locomotives to the Karelsky Okatysh iron-ore mining and processing plant in the Republic of Karelia, Russia, with two arriving at the end of May and the third in July to supplement six BMZ units already operating there.

The TEM18DM combines reliability with improved emissions performance and economical fuel consumption. It also features diagnostic systems and has been designed for ease of repair, and is able to operate in severe climatic conditions, such as those experienced north of the Arctic Circle.