The trains are the same as those used elsewhere in Sweden. 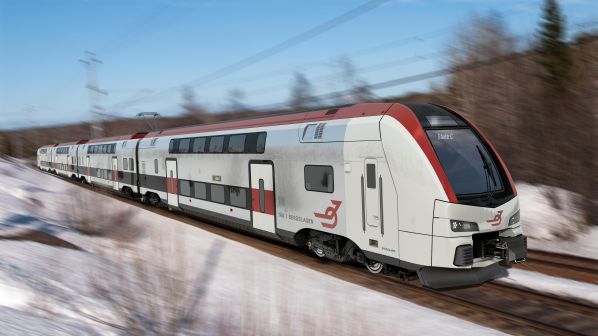 SWEDISH rolling stock leasing company Transitio has ordered another seven double-deck Dosto EMUs from Stadler on behalf of Tåg i Bergslagen (TiB), with a signing ceremony held in Stockholm on August 25.

The coaches feature large and airy entrances, and a sliding step to make it easier for passengers entering and leaving the train. Each seat is equipped with a reading slight and two power sockets. The coaches are sound-proofed, and pressure managed to avoid discomfort for passengers when travelling through tunnels.

The coaches are made of aluminium profiles, which makes them lighter than steel-bodied trains thereby reducing energy consumption and emissions, while still meeting safety requirements. Up to four trains can operate in multiple at one time.

The trains feature regenerative braking and air-cooled, dry transformers as opposed to those using oil.

The trains are designed to run in temperatures as low as -40oC and with 80cm of snow on the track, thanks to inter-coach connections with twin bellows, large specially-made snow ploughs, efficient floor and wall-heating systems and specially adapted insulation. Trains are fitted with carpeting made from absorbent material, which dries quickly due to the underfloor heating system. The underframes of the trains have been designed to reduce freezing and the accumulation of snow and ice, and the pantographs are able to cope with winter conditions.

“For our travellers, this means higher comfort and a better travel experience,” says TiB CEO, Ms Maja Rapp. “After trying the trains, I can state that they run smoothly and nicely even on older tracks where our other vehicles run significantly worse. The fact that the Dosto trains are also built for Swedish conditions and can withstand both minus degrees and snow on the tracks without problems feels reassuring.”

Transitio initially ordered 33 Dosto trains in 2016 and has now ordered 60 following additional orders in 2018 and 2020.

Services on the network managed by TiB are currently provided by Swedish national passenger operator SJ under a 10-year contract awarded in 2015, but the two parties agreed earlier this month to terminate the contract three years early.