TRANSLINK has awarded CAF a €50m contract to supply 21 new DMU cars for Northern Ireland Railways (NIR), with the agreement signed on November 6. 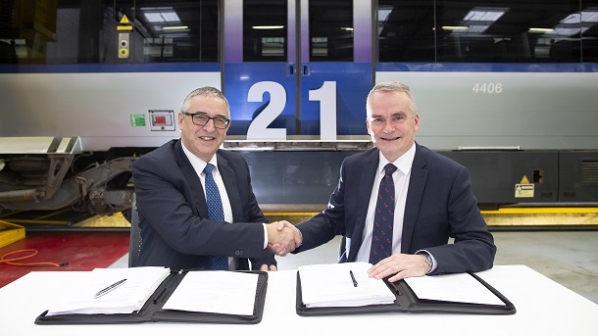 The intermediate vehicles are an option from the order for 20 CAF class 4000 three-car DMUs which entered service from September 2011. CAF also previously supplied 23 class 3000 DMUs which came into operation between 2004 and 2005.

Passenger numbers on NIR have grown by more than 130% in the last 12 years, reaching 15 million last year, the highest in the operators’ 50-year history.

“These 21 new carriages will allow us to build on this success and increase capacity, with around 1400 additional seats, operating six more carriage trains on busy routes at key times of the day,” says Translink group chief executive, Mr Chris Conway. “With a three-year lead time we would expect to start to take delivery of the new carriages during 2021 with the last sets planned to go into passenger service in Autumn 2022 following testing and commissioning.