Transmashholding gets off to good start in 2020

RUSSIAN train builder Transmashholding (TMH) started 2020 with the delivery of new locomotives and passenger trains and refurbished metro trains for both domestic and foreign customers. 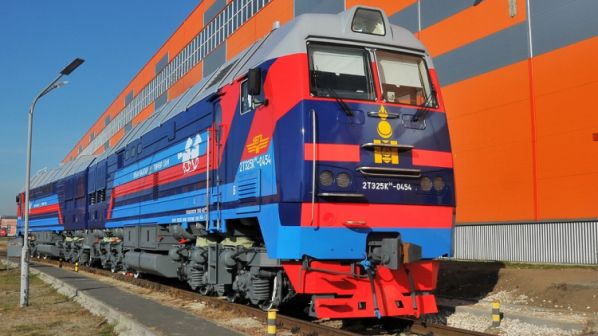 The 2TE25KM is a two-section locomotive with a Co-Co wheel arrangement.

TMH Bryansk Plant has delivered a TEM18DM shunting diesel locomotive and seven 2TE25KM mainline diesel freight locomotives to Ulaanbaatar Railway in Mongolia. TMH says the 2TE25KM is the newest locomotive of its type with 90% of the components produced in Russia.

To cope with the Mongolian climate, the diesel engines have an air purification system, while high-voltage cabinets have extra dust protection. The microprocessor-based control system has been updated to better manage the load on the diesel-generator and traction systems as well as auxiliaries.

TMH Bryansk Plant has also shipped the first three units from an order for 12 3TE25K2M three-section mainline diesel heavy-haul freight locomotives to the locomotive depot in Komsomolsk-on-Amur in Russia. The 3TE25K2M has an ac/dc traction system and bi-axis power control and is designed to operate in the harsh climatic conditions of East-Siberia and the Far East.

The TMH Plant in Demikhovo will ship 10 EP2D 11-car electric trains to Central Suburban Passenger Company (CPPK) between February and May. The trains have an air purification climate control system, folding ramps and fixtures for passengers travelling in wheelchairs, and Braille information panels.

CPPK now has a fleet 85 EP2D trains operating on the Moscow Railway network.

TMH Mytishi Plant has completed the refurbishment of two four-car trains for Sofia Metro under a contract awarded in December 2018, which includes an option to modernise 40 additional metro cars.

The refurbished cars retain mechanical and pneumatic compatibility with the existing trains operating on lines 1 and 2. The work has extended the life of the vehicles by 15 years and included renewing couplers, applying anti-skid protection to wheels, replacing potentially flammable trim materials with those compliant with modern safety standards, and installing safety glass, smoke detectors, and temperature sensors.

TMH has also refurbished and modernised the first 20 of 44 cars for Yekaterinburg Metro. The objective is also to extend the life of these trains by 15 years.