RUSSIAN fertiliser producer, MCC EuroChem, has awarded a contract to United Wagon for 700 new-generation wagons to transport potash from its Usolskiy Potash plant. Delivery of the wagons will be completed by the end of the first half of 2019. 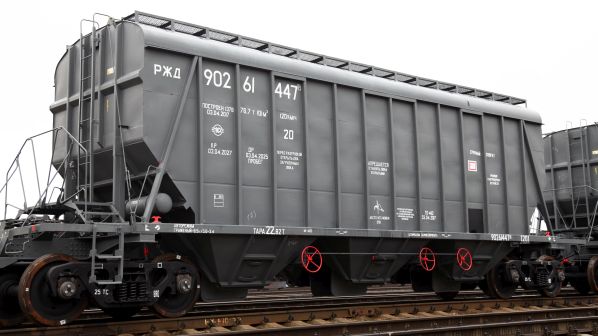 The wagons are fitted with 25-tonne-axleload bogies and are able to carry loads of up to 76.7 tonnes, which United Wagon says is 6 tonnes more than currently possible with existing wagons with standard bogies. The wagons have a volume of 101m3.

The inside of the wagons has a vinyl-copolymer two-component coating to provide a protective barrier between the fertiliser and the car body. The increased volume of the wagons lowers the centre of gravity thereby making it harder for the wagons to overturn.

Hatches are stamp welded to improve durability and rigidity while moulded-rubber-strip seals are more wear resistant than conventional seals. Each hatch has only two locking and sealing devices compared with eight on other hopper wagons.

United Wagon says the new wagons can be used for up to eight years or 1 million km between overhauls compared with just two years or 110,000km for conventional hopper wagons.