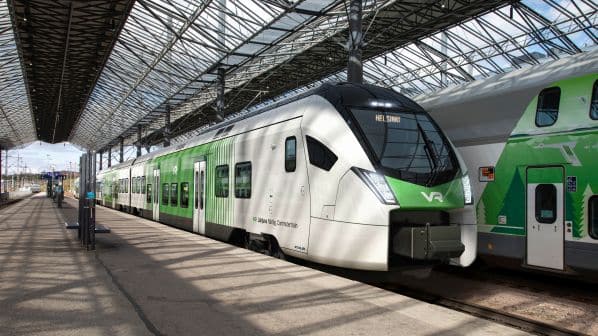 FINLAND’s national rail operator, VR, and Stadler have signed a contract for 20 single-deck Flirt EMUs, which will operate regional services in the Helsinki and Tampere regions.

The initial contract, which is worth €250m, includes the supply of spare parts as well as options for a further 50 trains and maintenance. Stadler was named as the preferred bidder on October 24.

The four-car trains have capacity for 796 passengers, including 356 seated, and a maximum speed of 160km/h. The trains can also be used as inter-city trains if required in the future. Delivery of the first EMU is scheduled for spring 2026.

The new commuter trains are 50% more energy-efficient than VR’s existing commuter fleet, with a lightweight aluminium construction and new converter technology to reduce energy consumption. The use of propane as a coolant, oil-free air compressors and the possibility to recycle a large part of the materials at the end of their service life will also make the trains more environmentally friendly, Stadler says.

Stadler has worked with a local agency to ensure that the new trains reflect Finnish design requirements. The interior is modular and can be modified as needed, such as to carry more bicycles in summer. The at-seat tables have been designed to make it easier to work on a laptop during the journey, and the trains will feature Wi-Fi and power sockets.

The EMUs have step-free entrances, low noise emissions inside and outside the trains and spacious multifunctional zones for pushchairs, wheelchairs, bicycles and luggage.

The EMUs will be specially adapted for the Nordic climate in Finland, with large snow ploughs, efficient air-conditioning featuring underfloor heating in the vestibules, and special heat insulation and sealed traction compartments to protect the equipment.

The new trains will begin operating commuter services in spring 2026 on lines D, R, T, Z and M, around Helsinki and Tampere, which currently use Sm4 rolling stock that was put into service between 1999 and 2005. Most of the Sm4 trains will be transferred to other routes to replace VR’s older Sm2 commuter rolling stock.