Introduction of the CAF-built class 196 is two years late but will increase train capacity by 25%. 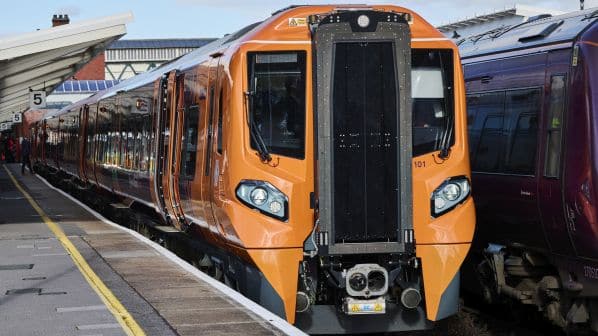 On October 17 at 07.00 passengers boarded the first WMR class 196 Civity DMU to enter service at Shrewsbury station for its maiden journey to Birmingham New Street.

The new Civity trains are being built and maintained by Spanish manufacturer CAF in its British factory at Newport in South Wales. The class is the first new fleet of vehicles to be introduced by WMR, which is operated by Abellio, replacing DMUs which are now nearly 20 years old, and is part of a £690m investment by the operator.

There will be 26 DMUs in the class 196 fleet, with onboard features including intelligent air conditioning, plugs and USB chargers at every seat and extra luggage space. Each DMU also offers 25% more capacity than the WMR trains they are replacing.

Although 17 of the 26 DMUs had already been delivered by CAF by November 2021, and the class was authorised for use as long ago as August 2020, their entry into regular service has been delayed until now by the Covid-19 pandemic.

There are also 81 Alstom (formerly Bombardier) class 730 Aventra EMUs on order, making a total of 333 new vehicles for WMT, but their entry into passenger service has also been delayed.

The new class 196 DMU fleet will be introduced gradually on the Birmingham - Shrewsbury route, and is then due to enter service on the route from Birmingham to Hereford via Bromsgrove, Droitwich and Worcester.