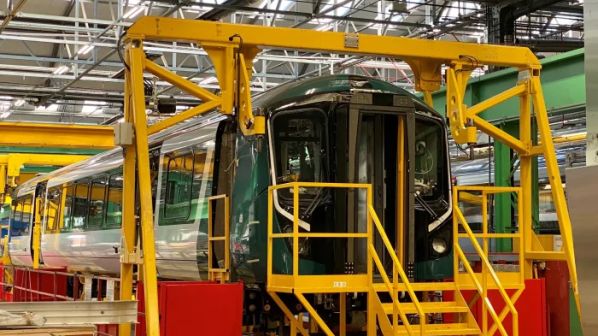 The remaining trains are currently under construction at Bombardier’s site in Derby, Britain, and are expected to enter service next year. The first set will be sent to the VUZ Velim test site in the Czech Republic before returning to Britain in October for operational tests.

“These superb new electric trains will enhance the travelling experience for our passengers, and I am delighted to see for myself that progress has been continuing apace despite the challenge of coronavirus,” says Mr Julian Edwards, managing director of West Midlands Trains.

“This is one of two new fleets we are introducing as we increase our capacity by 25% as we continue to welcome passengers back to the railway. Now more than ever our £700m investment into our new train projects will play a vital role in the future of train travel right across our network.”

The contract is one of two with a combined value of £680m placed by the franchise partners Abellio, JR East and Mitsui in October 2017 in preparation for West Midlands Trains’ takeover of the West Midlands Franchise in December of that year.

The other order for 26 class 196 Civity DMUs from CAF for operation on the Birmingham - Hereford and Birmingham - Shrewsbury lines is currently undergoing delivery.

The two contracts were financed by Infracapital and Deutsche Asset Management.