ALL to sell Argentine concessions

LATIN American Logistics (ALL) has announced plans to sell its two freight concessions in Argentina to the Italian-Argentine Techint group. 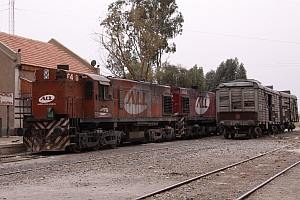 Subject to government approval, the transaction will cover the 1676mm-gauge 5690km Central network connecting Buenos Aires with Mendoza and San Juan provinces and the plus 2704km Mesopotámico standard-gauge network which links the capital with the north eastern provinces of Entre Ríos, Corrientes and Misiones, with connections to Paraguay and Uruguay. ALL has operated both networks since 1999 under a 25-year concession.

In total ALL Argentina has 158 diesel locos and 7380 wagons, and carries around 5 million tonnes of freight per year.

The sale will make Techint the largest railfreight operator in Argentina with the only other large-scale operators being the metre-gauge Belgrano Cargas, Nuevo Central Argentino operating on the Mitre 1676mm-gauge network northwest of Buenos Aires, and Ferrosur Roca which operates south of Buenos Aires.