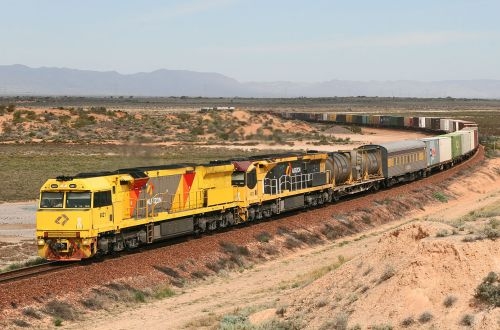 The strong financial result was primarily due to the continuing benefits from Aurizon's transformation programme to reduce costs and improve productivity which produced a $A 69m benefit plus a $A 40m net benefit from the sale of surplus maintenance facilities at Redbank in Queensland.

Aurizon CEO Mr Lance Hockridge says the company remains on track to achieve its target of a 75% operating ratio in 2014-15. "In this subdued, low-growth economic environment, we've been relentless on cost reduction and productivity improvement," says Hockridge. "Our transformation programme is helping us achieve solid earnings growth when overall market demand and revenue are relatively flat."

Second quarter iron-ore traffic was down 22% at 6.1 million tonnes, reflecting the loss of a major contract and the end of mining for another. General freight and intermodal freight combined grew by 2% to 12.2 million tonnes due to strong demand in Western Australia and Queensland, in spite of a 13% drop in intermodal volumes.

Despite the short-term difficulties with iron-ore and coal traffic, Aurizon is continuing to explore potential growth opportunities including the West Pilbara Infrastructure Project in Western Australia, the Intermodal Terminal Alliance joint venture with Qube for the development of the Moorebank freight hub west of Sydney, and the development of its Galilee Basin rail and port project with GVK Hancock.