Spare parts, equipment and expertise to be provided. 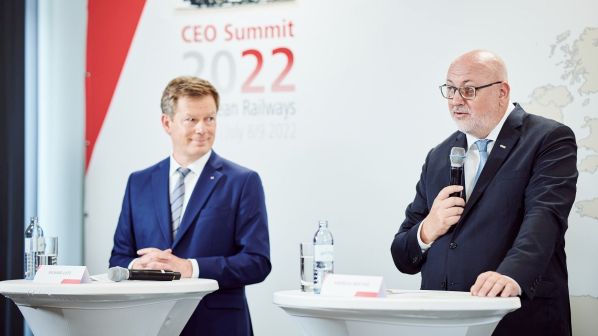 The declaration was signed in the run-up to a two-day CEO summit organised in Vienna last week by the Community of European Railway and Infrastructure Companies (CER).

DB says that it is providing personal protective equipment (PPE) for the UZ workforce worth €500,000 and will also provide technical expertise.

The German state operator is also examining the feasibility of supplying passenger coaches to UZ, but points out that they would need to be converted from standard to broad gauge.

DB, ÖBB and PKP are lobbying the European Union (EU) to create a Rebuild Ukraine fund to repair of the war-damaged UZ network as soon as possible.

The UZ network should also be more integrated into the Trans-European Transport Network (TEN-T), in particular through the development of new corridors to connect Ukraine and Moldova with the EU railway network.

These corridors would greatly assist the export of agricultural commodities that are now being stockpiled in Ukraine due to the lack of onward transport, as well as the movement of ores, steel and machinery.

Since the Russian invasion of Ukraine, DB says that 450,000 refugees have made use of free train travel provided in Germany, which is now also available digitally.

Intermodal block trains have carried aid to Ukraine, including food, drinking water, generators and first aid kits, via Kraków in Poland directly to terminals near Kyiv. DB says that 400 container loads have been delivered by rail, and a further 400 by road.

DB and UZ have found new routes for bulk freight such as grain, iron ore and sunflower oil. Containers have been delivered to the EU via ports on the Black Sea and in Poland.

Within Germany, DB has been helping refugees from Ukraine to find work by means of a telephone hotline and advice centres set up in Berlin, Cologne and Frankfurt with the federal employment agency. The programme also includes orientation and language courses. Over the past three months, more than 1500 interviews have been held, with firm job offers made to 30 refugees for posts including interpreter, engineer and recruitment coordinator.

“The Ukrainian railway workers are currently doing something impressive,” Lutz says. “They keep the country going. Despite the repeated attacks on routes and stations, operations continue.

“Because only a functioning railway system will be the key to the future reconstruction of the country, Ukraine needs sufficient financial resources and integration into the TEN-T in parallel with the admission process to EU membership.”

“The passenger and goods transport that is so important for our country is handled by rail,” says the Ukrainian ambassador to Austria, Mr Vasyl Khymynets. “I am therefore very grateful that Ukrainian Railways has been comprehensively supported by the other European railways since the beginning of the terrible war and that with this declaration there is now a further joint commitment by the CER."