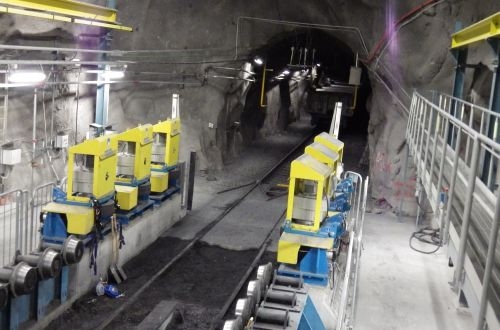 The new mining operation is situated 1365m below the original surface point for the mine and is projected to have sufficient capacity to support the mine's capped 30 million tonne annual extraction rate for the next 20 years.

The new operation, which cost SKr 12.4bn ($US 1.92bn) and took eight years to complete, has been in use since April 29 after testing began in December. Three chutes through which iron-ore is distributed to the trains below are currently operational which will ramped up to 10 by 2017 as production at the previous 1045m mining level declines. An additional 3km of track will be added taking the total to 15km by 2017, enabling LKAB to operate seven seven-wagon trains. Two trains are currently in use.

Schalke, Germany, has supplied nine locomotives, which use a combination of 750V dc electrification and batteries, for the project as part of a consortium led by Midroc Electro. This also includes Nordic Mines, which supplied the wagons, and Bombardier which supplied its Interflo 150 signalling solution which is based on its CBTC platform and provides driverless, automated train operation. The system also includes a traffic control centre, object controller system, automatic train protection onboard system and is compatible with the WiFi radio system already used in the mine.

Mr Hans Engberg, LKAB project manager who has led the undertaking, told IRJ that 1435mm gauge was selected for the new project because it was found to reduce spillage compared with the existing 891mm-gauge infrastructure, and because sourcing replacement rolling stock components would be cheaper.

He added that a railway rather than a conveyer was considered the most appropriate for this particular mining application. "We performed a life cycle cost analysis of five potential options, but a railway was preferred because of we had to locate the compressor 1.2km away from the excavator due to potential stresses in the rock in that area," Engberg says. "The railway is the most efficient way of transporting ore over this distance."