AZERBAIJAN officially inaugurated a new cross-border link to the Iranian city of Astara on March 5 when the first test train crossed the newly-constructed dual-gauge (1520mm and 1435mm gauge) bridge over the Astarachay river, which divides the two countries. 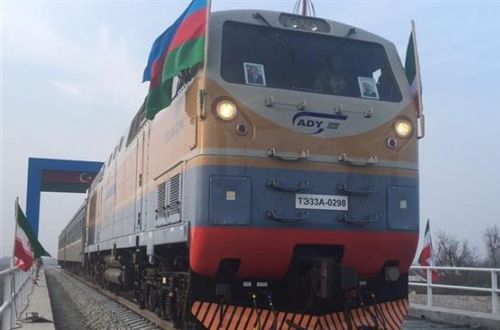 Construction on the 8.3km link began in April 2016, and the line runs from Astara, Azerbaijan, to the Iranian border city of the same name. From here the plan is to connect the line with the Iranian Islamic Republic Railways (RAI) network at Qazvin following completion of the 167km Astara - Rasht line, construction of which is expected to start later this year, and the 160km Rasht - Qazvin section, which is nearing completion.

The inauguration ceremony coincided with a visit to Iran by Azerbaijan president Mr Ilham Aliyev during which he discussed implementation of North-South Transport Corridor (NSTC) with Iran’s president Mr Hassan Rouhani. The Azerbaijan - Iran project is considered as a key missing link in NSTC, which is proposed to provide a direct rail link between India and the Caucuses to Russia and northern Europe, and is projected to carry up to 10 million tonnes of freight per year.

Aliyev also confirmed that Azerbaijan is investing in the Astara - Rasht link. From here, the line will connect with the Rasht - Qazvin section. Iran’s deputy minister of roads and urban development, Mr Kheirollah Khademi, confirmed in January that construction of this section was now 90% complete.