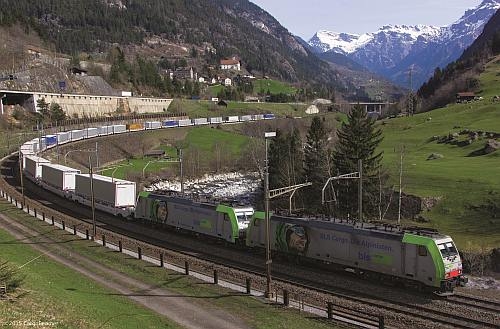 The trains, each with capacity for 28 units, operate between the new Cologne North terminal in Germany and Melzo near Milan, with BLS Cargo traction for the entire journey. This means that non-cranable road units including 4m semitrailers, tankers and silo units can be carried by rail on the Gotthard route for the first time.

Dr Jürgen Weidemann, chairman of Cargobeamer AG, also expressed his satisfaction with the partnership. "I am delighted that we have been able to gain a respected and reliable partner like BLS Cargo for operations on the Gotthard axis," he says. "This is another milestone in CargoBeamer's development."

CargoBeamer's unique parallel loading and unloading system works by allowing the lorry to drive onto a specially-developed loading pocket which transfers the semitrailer laterally. The tractor unit can then leave the terminal, even if the train has not arrived. When the train reaches the terminal, freight can be loaded and unloaded simultaneously, and according to CargoBeamer a 36-wagon consist can be handled in just 15 minutes.