DESPITE a challenging and eventful 2011, marked by a strong Swiss franc, fluctuations in freight volumes and problems with infrastructure bottlenecks, especially on Switzerland's Lötschberg route, BLS Cargo says its annual results released on April 4 show that it has almost recovered from the economic crisis of 2009. 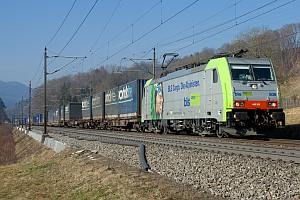 Photo Credit: Photo: David Gubler
Traffic volumes increased during the year to 3.83bn tonne-km which is comparable with 2008 levels and gives BLS a 43% overall market share, which makes it the largest single carrier for transalpine railfreight through Switzerland.
Improvements in traffic enabled the company to reduce its overall loss in 2011 to just SFr 500,000 ($US 550,000) from SFr 2.6m in 2010. Ebit also improved from SFr 2.4m in 2010 to SFr 4.2m last year while and unaccompanied combined transport was up 15.7% and conventional wagon traffic volume increased by 25%. Traffic on the Gotthard route was up 22% and the Lötschberg by 29%, while rolling road traffic was also up by 6.6% as the frequency of the service increased to 11 trains per day on Tuesdays, Wednesdays and Thursdays on the Freiburg - Novara route. However, export and import traffic fell by 41% due to the loss of a large flow to a competitor.
Categories: Europe, Financial, Freight, News
Tags: Switzerland