AFTER four years in the red, Swiss railfreight operator BLS Cargo announced on March 18 that it recorded a profit of SFr 1.5m ($US 1.7m) in 2013. 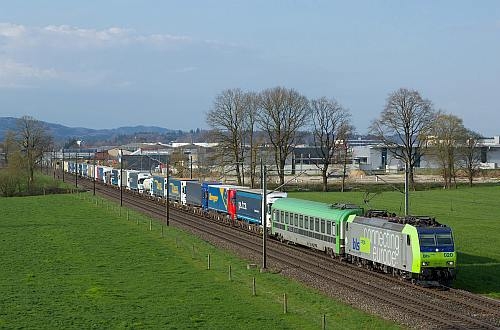 Operating revenues rose by 8% to SFr 182.3m, while performance improved by 5% to 3.5 billion net tonne-km, with intermodal traffic on BLS Cargo's principal axis, the transalpine Lötschberg route, showing an 11% increase in accompanied units and 15% in rolling road traffic. However it was a very different story for wagonload freight, which declined by 15%.

CEO Mr Dirk Stahl expects to see a similar picture this year, despite some radical changes. With effect from December 2013, BLS Cargo no longer carries intermodal traffic on the Gotthard route for DB Schenker Rail, which terminated its contract but still retains its 45% stake in the company. This was a loss-making business for BLS Cargo, but abandoning it forced the company to reposition itself on the transalpine market. It now focuses exclusively on profitable routes, and has been successful in gaining new clients, largely compensating for the loss of the DB Schenker business.

BLS Cargo has also begun to operate through trains from the Netherlands to Italy.

"We have sharpened up our profile as a neutral operator on the important Rotterdam-Genoa freight corridor, thus meeting strong customer demand in a liberalised market," explains Stahl. BLS Cargo is currently the leader in the transalpine intermodal traffic market in Switzerland with a share of 39.5%.