Brazil has declared September the Month of Rail with new legislation to accelerate new line construction. 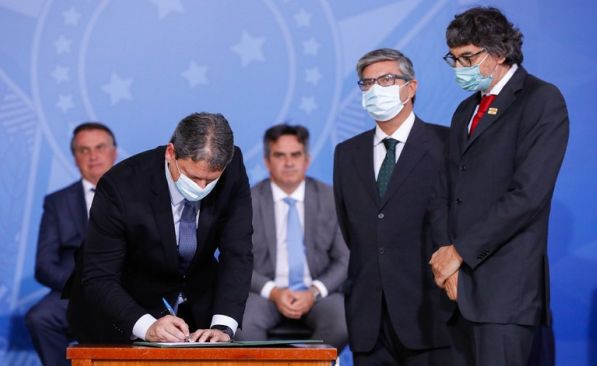 BRAZIL's Ministry of Infrastructure is assessing applications by four companies to build 10 new lines totalling 3300km, representing an investment of Reais 53.5bn ($US 10.16bn). This follows the signing of a new Pro Rail law by the country’s president Mr Jair Bolsonaro.

Bolsonaro, together with infrastructure minister Mr Tarcísio Gomes de Freitas, have declared September as the Month of Rail following the introduction of the new Pro Rail law designed to simplify and accelerate the process of building new lines.

“We are making a railway revolution, the biggest in the last 100 years,” Tarcísio Gomes de Freitas said at a ceremony on September 2 to launch the Pro Rail programme.

The applications to build the new lines will now be assessed by the Ministry of Infrastructure to see if they comply with the new legislation. The 10 planned new lines comprise:

The government also signed a 35-year concession contract with Bahia Mineração (Bamin) on September 3 to complete and operate the 537km phase one of the West-East Integration Railroad (Fiol) between Ilhéus and Caetité. Bamin will be responsible for investing Reais 3.3bn during the concession of which Reais 1.6bn will be used to complete the new line which is 75% complete. The line is expected to open in 2025.

The federal government is also working on the implementation of the other two sections: the 485.4km Fiol 2 between Caetité and Barreiras, where construction is in progress, including the participation of the Brazilian Army, and Fiol 3 from Barriers to Figueirópolis, which is awaiting approval. When complete, Fiol will be 1527km long.

As part of the Month of Rail, the government signed an agreement with the concessionaire of São Paulo Guarulhos Airport, GRU Airport, to build a 2.7km automated peoplemover to connect the Paulista Metropolitan Trains (CPTM) Line 13/Jade station on the edge of the airport with the three passenger terminals. GRU Airport will invest Reais 271.7m in the project rather than the federal government. CRU Airport will build and operate the peoplemover. Construction is expected to start in January and will take two years to complete.

The line will have capacity to transport 2000 passengers/hour/direction and will be operated by three trains each designed to carry 200 passengers. The air-conditioned trains will have space to accommodate luggage, Wi-Fi, and ambient sound and information panels connected to the airport.