THE first intermodal terminal for direct loading of lorry semitrailers between rail and ferry in France was inaugurated at the Port of Calais on October 23. 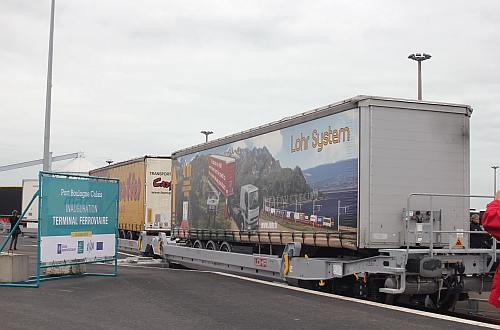 Equipped with the Lohr system for the horizontal loading of freight units without a crane or reach-stacker, the €7m terminal is capable of transferring any type of semitrailer from road to rail and vice-versa.

The opening of the Lohr UIC terminal also marked the launch of Viia Britanica, a new intermodal service linking Calais with Le Boulou on the France-Spain border near Perpignan, which will be operated by SNCF Logistics rolling motorway subsidiary Viia. The catchment areas are mainly Britain, Belgium and northwest France at the northern end of the route and southwest France and Catalonia in the south.

The 680m-long trains weigh up to 2000 tonnes and are formed of 20 low-floor Lohr UIC wagons accommodating up to 40 semitrailers. A total of 105 new wagons is available for the Viia Britanica service, which will start full commercial operations on January 12 2016, initially with one train in each direction on six or seven days a week. This will later be increased to two trains per day.

Viia Britanica will cover the 1200km route in around 20 hours and Viia expects to handle 25,000 units in the first year: the new facility in Calais has capacity to handle double that number.