A groundbreaking ceremony was held on August 2 to mark the start of the start of construction on a new €300m intermodal terminal at Inzersdorf south of Vienna. 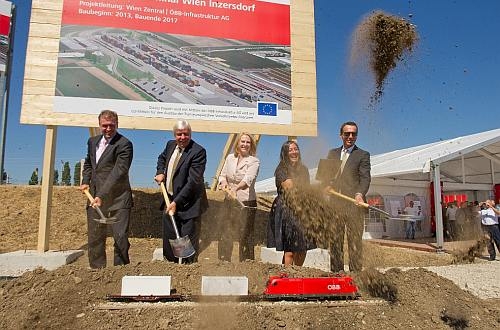 Planning for the project began as long ago as 1999 but the environmental impact assessment was not approved until last year.

The 55 hectare site is situated on the Inzersdorf – Wampersdorf – Wiener Neustadt line just south of Vienna Blumenthal station and close to the S1 highway. In addition to the two intermodal terminals for containers and swapbodies, there will be a loading area for wagonload traffic and a warehousing and distribution centre.

At present Vienna has two intermodal terminals: Freudenau has recently been expanded but is operating close to capacity, while Vienna Northwest, which is situated in an urban area near Praterstern station, has insufficient capacity and track length, and will therefore close when Inzersdorf becomes operational.

The first intermodal terminal and other facilities at Inzersdorf will be completed in 2017, while the second terminal will be constructed at a later date depending on demand.