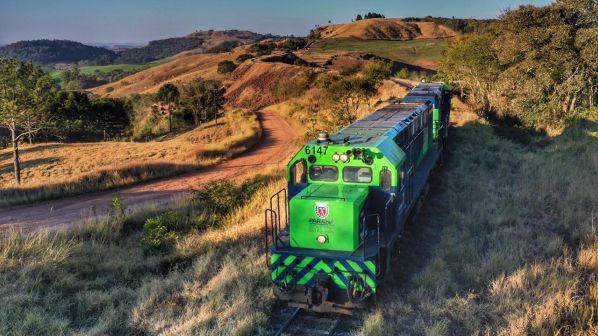 THE governor of the Brazilian state of Paraná, Mr Carlos Massa Ratinho Junior, has launched the public consultation process for the Nova Ferroeste project which aims to build 1567km of new freight railway at a cost of Reais 35.8bn ($US 6.98bn).

From Cascavel, a branch would also run to Foz do Iguaçu, close to the frontier with Paraguay and Argentina, serving Brazil’s major grain production area.

A recent addition to the project is a route from Cascavel to Chapecó in the state of Santa Catarina, a hub for refrigerated freight.

The state ministry of infrastructure will seek bids from the private sector for one concession and four authorisations to build and operate Nova Ferroeste over a period of 99 years.

“The connection with the port of Paranaguá is the key to unlocking the project,” says Mr Luiz Henrique Fagundes, coordinator of the Paraná State Railway Plan. The section from Cascavel to the port of Paranaguá would require investment of Reais 14.5bn. Reais 6bn is foreseen to be invested in rolling stock.

Nova Ferroeste is expected to carry soy, bran, maize, wheat, sugar, beef, poultry, pork, fertiliser and wood, and is set to become the second most important corridor for grain and refrigerated containers in Brazil.

Around 70% of South America’s GDP is generated within a 1000km radius of Nova Ferroeste, which is expected to transform the state of Paraná into a South American logistics hub by attracting consignments from neighbouring countries such as Argentina and Paraguay.

If in operation today, the new railway would carry 38 million tonnes, with 26 million tonnes going directly to the port of Paranaguá.

“The port of Paranaguá is already preparing for this new flow,” says Fagundes. “In 2021, 60 million tonnes were handled. In 2030, with the approved investment, it will reach 100 million tonnes.”

Work costing a total of Reais 2.3bn is expected to be undertaken at Paranaguá over the next two years. The private sector is expected to provide Reais 1.61bn, while the state government is due to invest Reais 678m in the Paranaguá and Antonina terminals by 2024.

The Nova Ferroeste project has been developed throughout to have the lowest possible socio-environmental impact.

The design of the route from Maracaju to Paranaguá, and its branches to Foz do Iguaçu and Chapecó, should not have any negative impact on indigenous communities, staying at least 5km away from these areas.

Environmental impact has been reduced by selecting an alignment between Lapa and Paranaguá that follows an existing highway. This will also shorten transit times and enable double-stack container trains to be operated.

According to the Sustainable Markets Initiative, Nova Ferroeste has the potential to substantially reduce greenhouse gas emissions and promote economic growth in the south and centre-west regions of Brazil.