No timeline set for restoring operation on two other lines used by Canadian National. 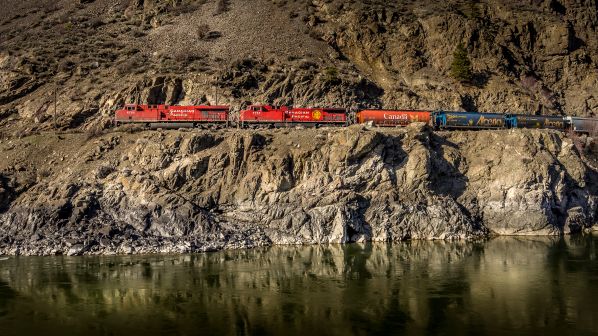 CANADIAN Pacific (CP) will resume services between Kamloops, British Columbia, and Vancouver on its mainline from Alberta by 12.00 Pacific Time on November 23 after heavy rainfall on November 14 caused significant damage to infrastructure.

CP says 30 sites across its Thompson and Cascade subdivisions were damaged with 20 resulting in “significant loss of infrastructure.” The Class 1 mobilised hundreds of employees and contractors from across the network as part of its recovery efforts. Crews moved 114,000m³ of earth, riprap (rock) and other construction materials using 80 pieces of heavy work equipment to rebuild damaged areas.

However, service remains suspended on Canadian National’s (CN) mainline from Alberta through the Fraser Canyon and a second line it leases which runs from Prince George to North Vancouver via Williams Lake, Lillooet and Squamish. A CN spokesman quoted by the Vancouver Sun, says four points on the Squamish subdivision have been impacted by landslides and washouts, making the track impassable. Repairs on the line are continuing on a day-by-day basis but a timeline has been set for completion.

Closure of the lines has severely impacted grain shipments through the port of Vancouver. On November 19, 22 vessels were awaiting delivery with a “couple hundred thousand tonnes” of grain stuck in transit near Alberta, according to Quorum, which monitors Canadian grain shipments. The group says high levels of precipitation forecast for this week may limit the capacity to load the vessels.

CP noted that success will require collaboration across the supply chain with urgent weekend work and flexible schedules at customer and terminal locations to help get freight moving efficiently again.

CP says critical infrastructure designation helped accelerate its recovery as equipment was positioned during the storm and then deployed immediately after conditions eased with crews working “around the clock” to restore the line.

CP also worked with the British Columbia Ministry of Transportation and Infrastructure, Transport Canada and contractors to identify damage and priority locations to reopen highways and its rail network. Additionally, through a partnership with the Ministry of Transportation and Infrastructure, CP is facilitating the reconstruction of the grade for the rail infrastructure and the Trans Canada Highway at Tank Hill west of Spences Bridge. CP says this has allowed the ministry to redirect its equipment to support other highway repairs.

“I am extremely proud of the CP team,” says CP president and CEO, Mr Keith Creel. “Their extraordinary dedication, grit and perseverance in the face of extremely challenging conditions are the reasons we are able to restore our vital rail network in only eight days. The following 10 days will be critical. As we move from response to recovery to full service resumption, our focus will be on working with customers to get the supply chain back in sync.”