GERMAN Rail's (DB) rail freight subsidiary, DB Cargo has confirmed plans to withdraw freight services from 215 locations in Germany reducing the total number of locations it serves to around 1300. 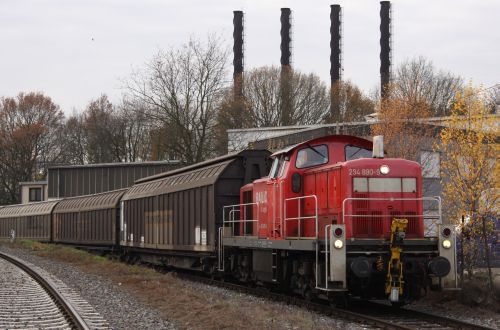 A DB Cargo freight pulls out of a siding in Freidrichsfeld (Niederrhein).
Photo Credit: Keith Fender

DB Cargo, which made a loss of €183m in 2015, is currently trying to reduce costs as it attempts to return to profitability and growth. DB Cargo says the 215 locations only generate around 0.4% of its turnover and are not therefore worth serving. It is possible that some will be served by some of Germany's many small short-line style operators as has happened in the past when DB has ceased serving freight customers.

DB Cargo has set itself a target of growing at 1% faster than the overall market per year from 2018, and says it also needs to "enormously improve" both productivity and quality.

DB reported in March an overall loss of €1.3bn - its first loss since 2003 - despite a 1.9% overall increase in group revenues to €40.5bn. The underlying cause was the poor performance of its rail freight business, especially in Germany. Despite a 1.4% overall increase in freight tonne-km in Germany during 2015, DB Cargo suffered a 4.3% drop in tonne-km to 98 billion and saw its freight revenue drop by 8-10%.

DB has previously admitted that many of its customers switched to competitors during the series of strikes in 2014-15 and have now signed long-term contracts with those operators. DB says that the strikes cost it €360m in total revenue and €300m in overall Ebit profit.