DB Schenker Rail celebrated the operation of the 500th 835m-long freight train between Germany and Scandinavia on February 18. 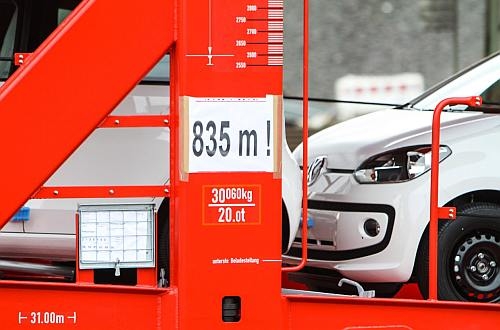 The longer trains began operating on the 210km route between Maschen yard near Hamburg and the German-Danish border at Padborg in December 2012 following the completion of a €10m project by German infrastructure manager DB Networks to adapt the line for 835m-long trains. The project included modifications to the track layout at a number of locations as well as repositioning of axle counters and adjustments to protection systems at 29 level crossings.

DB Schenker says the project has increased rolling stock utilisation on the route by 22%, raised train capacity by 25% and saved more than 200 train movements since the start of operations.

835m-long trains have been operating in Denmark for some time, but until the launch of the project the maximum train length permitted on the German section of the route was 670m. Elsewhere in Germany the maximum permitted length for freight trains is 740m, although DB says it is working on a project to examine the viability of running 1500m-long trains.