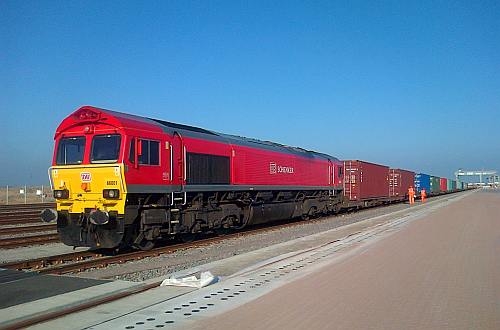 The train carried containers which had been unloaded earlier in the week from fire-damaged cargo ship ZIM Rotterdam, which was diverted to the new port from nearby Felixstowe on September 13. Terminal operator DP World organised a special train with DB Schenker Rail UK to transport the containers from the site.

DB Schenker Rail will begin operating regular trains from London Gateway when the port opens in November, with up to four trains per day serving Trafford Park and Daventry International Rail Freight Terminal near Rugby.

The port area of the site has two rail terminals, while six warehouses in the logistics park will have a rail connection.

The facility is constructed on the site of the former Shell Haven oil refinery and is linked to the national network via a short branch from the London – Shoeburyness line east of Tilbury. A new double-track curve has been constructed between Thames Haven Junction and the perimeter of the port complex to accommodate 750m-long trains. Around 20km of new track will be required to serve the port area and logistics park.