Sheikh Theyab bin Mohamed bin Zayed Al Nahyan inaugurates trackwork on the respective 216km and 94km sections of the project in the UAE. 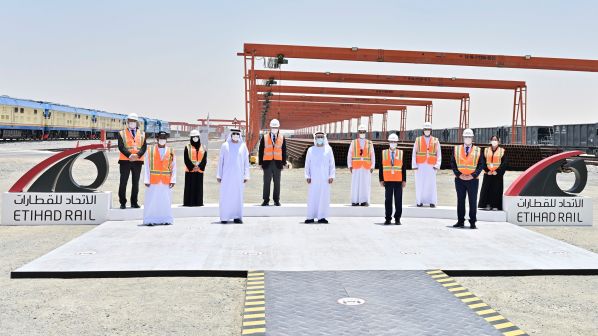 TRACKLAYING is now well underway on another two packages of Phase 2 of the Etihad Rail project in the United Arab Emirates.

China Railway Construction Corporation, and Ghantoot Transport & General Contracting are responsible for the tracklaying, which is taking place in both directions from a construction hub at Saih Shuaib - southwest towards Abu Dhabi and northeast towards Dubai. Saih Shuaib is also the location of a new sleeper factory.

Sheikh Theyab bin Mohamed bin Zayed Al Nahyan, chairman of the Abu Dhabi Crown Prince’s Court and chairman of Etihad Rail, inaugurated the track laying project last month. Sheikh Theyab took a 10km journey on an inspection train from Saih Shuaib to Al Maha Forest, during which he was briefed on Etihad Rail’s procedures to protect the natural habitat during the construction project, including the development of bridges, culverts, and animal crossings.

The two contractors won a Dirhams 4.4bn ($US 1.2bn) contract in June 2019 for package 2B, comprising the 216km route from Liwa, near Tarif, to Saih Shuaib, which includes links to Khalifa Industrial Zone, Abu Dhabi, Khalifa Port and Industrial City of Abu Dhabi, and the 94km Sharjah - Jebel Ali  package 2C, comprising 74km line in Dubai and a 20km branch to Jebel Ali port. The two design-build packages include earthworks, bridges and tunnels, animal crossings and tracklaying. Construction got underway in April 2020.

Phase 2 of the Etihad Rail project involves expanding the network to Ghuweifat on the border with Saudi Arabia, east to the city of Fujairah on the Gulf of Oman, which in addition to the 264km Phase 1 from Shah to Ruwais, will take the network to 1200km.

Tracklaying commenced on the 139km package 2A from Ghuweifat to Ruwais in January.

During his visit, Sheikh Theyab stressed the importance of the project to support the UAE’s economic growth by connecting key ports with production and manufacturing plants and centres of population, which will positively affect the lives of citizens and residents of the country.