The railway will haul 3.5 million tonnes of construction material annually for Stevin Rock. 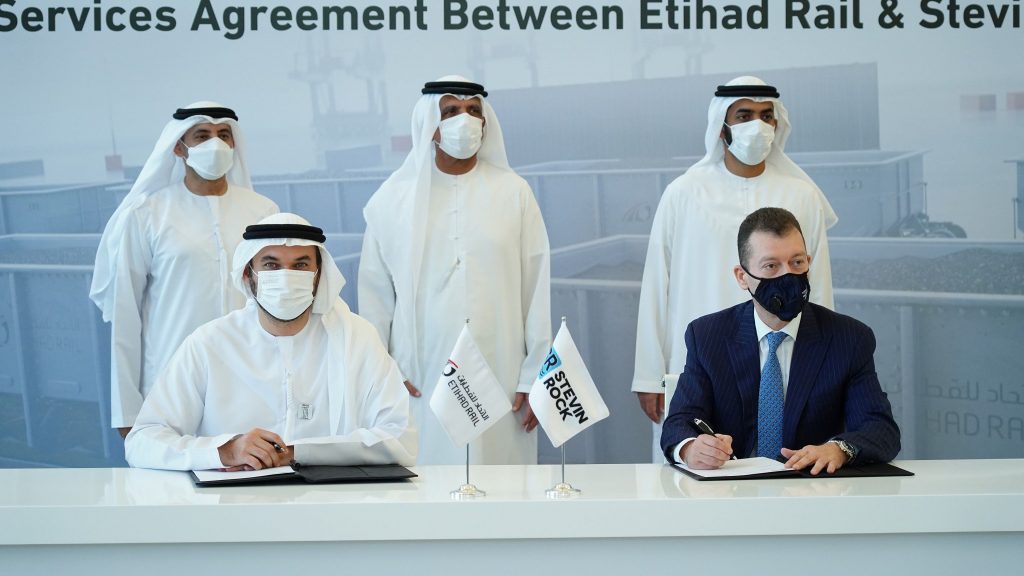 ETIHAD Rail and Ras Al Khaimah’s Stevin Rock, one of the largest quarrying companies in the world, have signed an agreement under which Etihad Rail will transport raw materials from Ras Al Khaimah, the northernmost emirate of the United Arab Emirates (UAE), to Abu Dhabi.

The agreement was signed by the CEO of Etihad Rail, Mr Shadi Malak, and general manager of Stevin Rock, Mr Naser Bustami.

Etihad Rail says the deal is significant as the first in a series of commercial agreements for Stage 2 of the UAE rail network, a network of more than 605km that will stretch from Al Ghuwaifat on the border with Saudi Arabia in the west to the port of Fujairah in the east.

An estimated 3.5 million tonnes of construction material will be carried by 500 annual services from Stevin Rock’s Al Ghail quarry in Ras Al Khaimah to Abu Dhabi.

Each 1km-long train will consist of 70 wagons with a carrying capacity of 7000 tonnes. This will remove 100,000 lorry journeys annually, with significant environmental benefits.

Stevin Rock, which has been operating in Ras Al Khaimah since 1978, is one of the largest quarrying companies in the world, with an annual production capacity of more than 80 million tonnes of limestone, dolomite and gabbro from three quarries.

“By connecting with quarries in the Northern Emirates, Etihad Rail will ensure faster and more cost-effective delivery of construction materials, which in turn, we continue to deliver on our commitment to contribute to the reduction of carbon emissions by decreasing truck movement on the roads, supporting our overall ethos of a sustainable future and the UAE’s wider sustainability targets,” Malak says.