EUROCAREX achieved a milestone in its plans to launch a European high-speed railfreight network yesterday, when it operated a test train from Lyon to London. 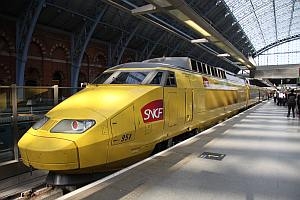 The consortium of European airport and rail operators, global express freight companies Fedex and TNT, and airlines, including Air France-KLM, used one of the small fleet of postal TGV sets operated by French Railways (SNCF) and the French Post office on the overnight run from Lyon Saint Exupéry airport to London St Pancras via Paris Charles de Gaulle airport.

Eurocarex is currently tendering for a fleet of up to 25 new high-speed container carrying trains, and both Alstom and Siemens are bidding; Eurocarex revealed it is also possible that converted former passenger TGVs obtained from SNCF may be used for the start of services in 2015 - 2017.

Up to ten trains will be needed for the initial phase of the project, which will involve construction of rail terminals located within the secure airside perimeters of airports close to existing high-speed lines. Terminals at Paris Charles de Gaulle, Lyon Saint Exupéry, Liège-Bierset, Cologne-Bonn and Amsterdam Schiphol are planned in the first phase, and Eurocarex also plans to build a terminal adjacent to High Speed One east of London, with easy access to the city's M25 orbital highway.