GERMANY's Eurogate Intermodal and ICE Holding, Hungary, acquired all remaining shares in railfreight operator Floyd, one of the first open-access operators to enter the Hungarian market, for an undisclosed sum. 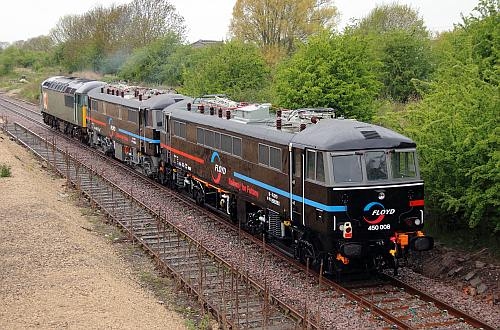 Eurogate and ICE already owned a 74% stake in Floyd and completed their acquisition of the remaining 26% from the company's founder Mr András Bogdán on May 23.

Bogdán's shares were purchased in two consecutive steps by EGIM, a 100% owned subsidiary of Eurogate, and ICE Holding, Hungary. EGIM now owns 64% of the shares in Floyd, while ICE holds 36%.

Bogdán has also relinquished his role as managing director of Floyd, which will now be led by a management board headed by chairman Mr Elmar Grams.

Floyd will continue to focus on international operations from Hungary to Romania, Slovakia, Poland, the Czech Republic, Slovenia, Austria, Germany and the Benelux countries.

Last year Floyd became the first Hungarian railfreight operator to receive a licence to operate freight trains in Austria, and continues to expand its fleet with the acquisition of class 86 electric locomotives (pictured) from Britain.