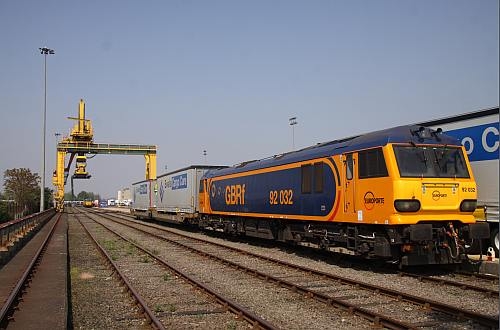 The train left Antwerp, Belgium, on April 21, travelling via Britain's High Speed 1 to reach Barking in east London early on the morning of April 22, completing the 400km journey in seven hours.

Europorte says that by running overnight in both directions, it is possible for trailers to arrive in Britain in the early hours, be driven to destinations within 200km of London, unloaded /re-loaded, and returned on the same train that evening. ECC and Europorte believe the increasing cost of fuel, road pricing and regulations on lorry drivers' working hours will make rail a more attractive option for cross-Channel traffic.

With ECC as its launch customer, Europorte plans to start regular services in September. Three trains per week will run initially, conveying nine twin-pocket wagons (accommodating a total of 18 semi-trailers) and six twin intermodal flats to be used by ECC partner company Ewals Intermodal. Europorte and ECC expect to increase services to six per week in the longer-term.

The trains will operate from terminals in Antwerp, Genk or Duisburg. Because the wagons are slightly out-of-gauge for routes in northern France, Europorte has agreed with French Rail Network (RFF) to route the trains through Mouscron, Lille, and Calais Fréthun.

Once the initial service is established, Europorte will evaluate the purchase of pocket wagons to expand services, probably serving German and Eastern European terminals. It is already working with British infrastructure manager Network Rail to establish how services might be extended further north.