The train will regenerate electricity during downhill sections of Fortescue’s network in Western Australia, removing the need for lineside recharging equipment. 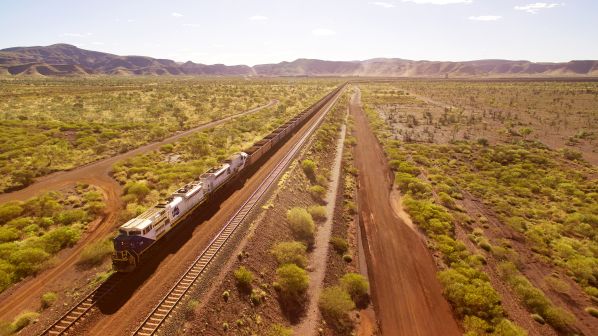 During the acquisition announcement at the Williams technical campus in Oxfordshire, Britain, WAE and Fortescue announced they will begin development of an emissions free “Infinity Train,” a regenerative battery electric iron-ore train that will use gravitational energy to recharge its battery systems when travelling fully loaded on downhill sections. The battery’s capacity will be sufficient to not require any additional charging for the return trip.

WAE was founded in 2010 by Sir Frank Williams, who also founded the Williams Formula 1 team. Williams died in November 2021.

WAE will remain an independent company to accelerate its growth, while its battery technology division will be closely coordinated with Fortescue. Both will be managed by Fortescue’s green energy, technology and development company Fortescue Future Industries (FFI). WAE and Fortescue have worked together since early 2021 to design and build a prototype battery system to power an electric mining haul truck.

FMG currently has 54 locomotives that haul 16 2.8km-long trains comprising 244 ore wagons with capacity for 34,404 tonnes of ore. FMG’s rail operation consumed 82 million litres of diesel in the 2021 financial year, accounting for 11% of the company’s scope 1 emissions, which it hopes to eliminate once the battery train is introduced. FMG is targeting net zero scope 1 and 2 emissions by 2030.

The study and development of the Infinity Train is expected to cost FMG $US 50m over the new two years, with the capital costs and schedule to be refined during this period.

“The Infinity Train will not only accelerate Fortescue’s race to reach net zero emissions by 2030, but also lower our operating costs, create maintenance efficiencies and productivity opportunities,” says Fortescue founder and chairman, Dr Andrew Forrest. “The Infinity Train will join Fortescue’s green fleet and will contribute to Fortescue becoming a major player in the growing global market for green industrial transport equipment, providing great value for our shareholders.”

“The acquisition of WAE is an important step in Fortescue’s transition to a global green energy and resources company,” says FMG CEO, Ms Elizabeth Gaines. “The Infinity Train has the capacity to be the world’s most efficient battery electric locomotive. The regeneration of electricity on the downhill loaded sections will remove the need for the installation of renewable energy generation and recharging infrastructure, making it a capital efficient solution for eliminating diesel and emissions from our rail operations.”