THE driver of an SBB Cargo International freight train is dead and several lorry drivers are injured after a locomotive hauling a rolling road service collided with a concrete bridge section at Auggen on the Karlsruhe - Basle main line, about 20km north of Basle, at around 19.30 on April 2. 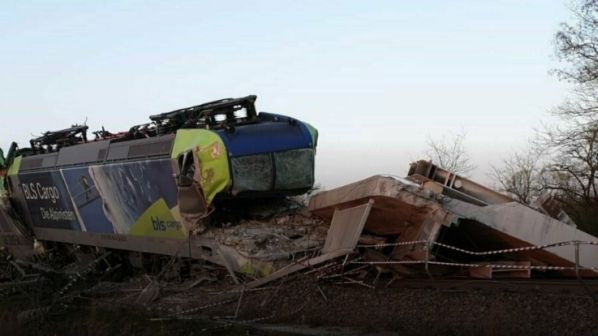 The collision happened at Auggen on the Karlsruhe - Basel line.
Photo Credit: SBB

The concrete section had fallen from a bridge which was set to be demolished this weekend, German police said. The locomotive and a coach for drivers, which was coupled to the locomotive, derailed following the collision. The train was loaded with seven lorries and was operating on the RALpin rolling road route from Freiburg im Breisgau to Novara, Italy.

SBB Cargo International is responsible for freight traffic on the German section of RALpin rolling road route to Basle with SBB also operating services in Italy and BLS in Switzerland. The train was hauled by a BLS Cargo locomotive.

The bridge is set to be replaced by a new structure, which is under construction. The work is part of the €385m Mülheim (Baden) - Auggen rebuilding project that is installing a second pair of 250km/h tracks as part of the wider Karlsruhe - Basle quadrupling project.

German Rail (DB) confirmed on April 3 that the route between Freiburg and Basle is closed. Restrictions have been introduced on ICE services from Berlin, Kiel/Hamburg and Dortmund to Basle with southbound services now terminating in Freiburg and northbound trains commencing their journey in Freiburg. Cross-border services are already severely disrupted due to the coronavirus pandemic.

Services on the Rhine Valley Line was also severely disrupted for nearly two months in 2017 after a tunnel beneath the town of Rasttat, which is part of the Karlsruhe - Basle upgrade, collapsed. Construction on the tunnel resumed in August 2019.

The route is one of the busiest sections of railway in Europe, with lengthy double-track sections usually used by up to 400 trains per day, including 216 freight services.