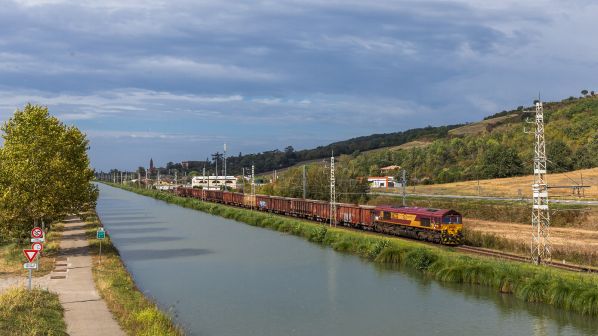 A new entrant to the French freight market, Logi-Railway, is using diesel traction to haul trains over very long distances on electrified routes as the use of electric locomotives is too expensive.

Logi-Railway managing director, Mr Vincent Chansel, said that there was no question of using electric traction after infrastructure manager SNCF Network increased the charge for traction current by more than four times from €111.95/MWh in 2022 to €473.51/MWh in 2023.

The rail industry has asked the French government to intervene.

In place of electric traction, Logi-Railway is using class 66 diesel locomotives or pairs of Vossloh G1206 locomotives to haul container trains from Champigneulles, near Nancy in eastern France, to Bayonne in the southwest, a distance of over 1100km.

Diesel traction is also being used to haul container trains from Champigneulles to Rennes (800km), and on trains carrying cereals from the Centre region to Marseille (900 km) and Lacq (750 km).

Logi-Railway has hired three class 66 locomotives from DB Cargo France, while the G1206s are being provided by track maintenance company ETF.

As a short-term measure, Logi-Railway had leased a class BB 36000 electric locomotive from Akiem but this locomotive is now on its way to Hungary.

Logi-Railway commenced operations late last year, providing shunting services for other operators at Champigneulles. Earlier this year it began hauling cereals for VTG, the service to Lacq carrying maize for the production of bio-ethanol. Service frequency will gradually rise to a train a week on the routes to Marseille and Lacq.

The container services to Bayonne and Rennes are expected to operate twice a week as traffic builds up. All traffic is new to rail and is taking lorries off French roads.